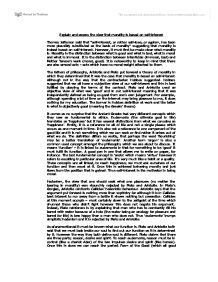 Explain and assess the view that morality is based on self-interest Thomas Jefferson said that "self-interest, or rather self-love, or egoism, has been more plausibly substituted as the basis of morality" suggesting that morality is indeed based on self-interest. However, it must first be made clear what morality is. Morality is the distinction between what is good and what is bad, what is moral and what is immoral. It is the distinction between infanticide (immoral, bad) and Mother Teresa's work (moral, good). It is noteworthy to keep in mind that there are also amoral acts - acts which have no moral weight attached to them. The fathers of philosophy, Aristotle and Plato put forward a theory of morality in which they determined that it was the case that morality is based on self-interest. Although not in the way that the contractarian Hobbes suggested. Hobbes suggested that we all have a subjective view of our self-interest and this is best fulfilled by obeying the terms of the contract. Plato and Aristotle used an objective view of what was 'good' and in out self-interest meaning that it was independently defined as being as good from one's own judgement. ...read more.

Callicles at this moment accepts - most certainly down to the zeitgeist of the time which shunned those who didn't fight however this does not negate his argument. Indeed, Plato reinforces is by explaining that man who has to constantly fill his barrel with water because of a hole (the water being an analogy for pleasure and barrel for life) is less happy than a man who does not. Thus 'eudemonia' trumps simplistic hedonism and it is rejected by Plato and Aristotle. As aforementioned it must be known what our function is. Plato and Aristotle both said that we must look inside our soul to find out our function as it is determined by it. However the way they both define soul is different. Plato claims that there are three parts; reason, desire and spirit. To reach eudemonia, reason must be in control (like a chariot rider) of the two impulses desire and spirit (like horses). Once this is done we can reach the perfect Form of the Good (which all good things relate to). This form is present, like all forms, in the realm of the forms and not this one. Once this achieved, then we will be moral and just - but it is vital that the balance between desire and spirit is controlled by reason. ...read more.

This would push Plato in seeking a moral theory elsewhere away from his forms. Aristotle's theory is also not free from criticism; he suggests that each being and each thing has a function. However this does not seem to hold for atheists for it does seem plausible that everything be given a function without a designer or God (which they do not believe in). The attack launched on both of them is that they do not understand morality. For when we do something good we are doing it for self-interest but this seems to fly in the face of facts. People like Mother Teresa can not be said to act just for self-interest. Even if it seems that the person is given a reward for doing such things, it does not follow that the person did those things because they were self-interested - indeed, it could just be a consequence of what they have done and no the cause. Thus to conclude, to say that we our moral because of self-interest is both pessimistic and untenable in face of altruism (acts which are done selflessly). Not only this, but both Plato and Aristotle's metaphysical aspects of their theories have led to their downfalls and although they are highly respected and influential, the concept of 'forms' and the concept that everything has a function would not stand strong in a scientific peer-reviewed journal. ...read more.