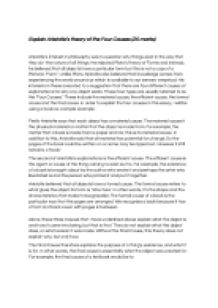 Transfer-Encoding: chunked ﻿Explain Aristotle?s theory of the Four Causes (25 marks) Aristotle?s interest in philosophy was to question why things exist in the way that they do- the nature of all things. He rejected Plato?s theory of Forms and instead, he believed that all objects have a particular form but this is not a copy of a Platonic ?Form?. Unlike Plato, Aristotle also believed that knowledge comes from experiencing the world around us which is available to our senses- empirical. His interests in these areas led to a suggestion that there are four different causes of explanations for why any object exists. These four types are usually referred to as the ?Four Causes?. ...read more.

The efficient cause is the agent or cause of the thing coming to exist as it is. For example, the existence of a book is brought about by the author who wrote it and perhaps the artist who illustrated is and the person who printed it and put it together. Aristotle believed that all objects have a formal cause. The formal cause refers to what gives the object its form or ?structure?. In other words, it?s the shape and the characteristics that make it recognisable. The formal cause of a book is the particular way that the pages are arranged. We recognise a book because it has a front and back cover with pages in between. ...read more.

His theory was that once an object had fulfilled its purpose- the final cause or its potentiality, it has achieved greatness and perfection. When an object is reaching its potentiality is said to be in motion. So when a notebook is being written in, it is in motion because it is fulfilling its final cause. The notebook has then achieved greatness and perfection. To conclude, Aristotle tried to explain the nature of all things- how they exist in the way they do, by suggesting the Four Causes. The material these included the material cause, the efficient cause, the formal cause and the final cause. He believed that they could be applied to everything because if something exists then it must have a creator and purpose. ...read more.