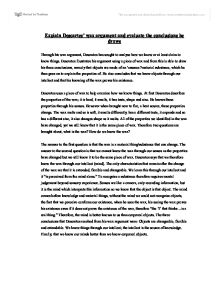 Explain Descartes(TM) wax argument and evaluate the conclusions he draws

Explain Descartes' wax argument and evaluate the conclusions he draws Through his wax argument, Descartes has sought to analyse how we know or at least claim to know things. Descartes illustrates his argument using a piece of wax and from this is able to draw his three conclusions, namely that objects are made of an 'essence'/material substance, which he then goes on to explain the properties of. He also concludes that we know objects through our intellect and that his knowing of the wax proves his existence. Descartes uses a piece of wax to help examine how we know things. At first Descartes describes the properties of the wax; it is hard, it smells, it has taste, shape and size. He knows these properties through his senses. However when brought near to fire, a heat source, these properties change. The wax melts and so is soft, it smells differently, has a different taste, it expands and so has a different size, it also changes shape as it melts. ...read more.

proves his existence even if it does not prove the existence of the wax, therefore "the 'I' that thinks...is a real thing." Therefore, the mind is better known to us than corporeal objects. The three conclusions that Descartes reached from his wax argument were: Objects are changeable, flexible and extendable. We know things through our intellect; the intellect is the source of knowledge. Finally, that we know our minds better than we know corporeal objects. However Descartes is not completely sound in his conclusions. Objects do not necessarily have to be flexible as he says all objects are. Take the example of a table, if I smash it up into splinters it is no longer a table, arguably it is the product of a table but we recognise it as being distinct from a table, the table has not changed form, as the table was formed from a tree which was known as a tree not a table, the wood splinters have formed from the table and so is no longer a table, the object has completely changed in essence. ...read more.

Descartes' final conclusion, our minds are better known to us than corporeal objects, is well justified by him but at the same time open to criticism. Admittedly Descartes did not have the psychological research we now have today, and so obviously can be forgiven for some inaccurate conclusions. But the statement is wrong in many ways. Descartes may well believe himself clever enough to understand the workings of his mind better than objects, but this is doubtful, could he explain the subconscious? Especially when we can explain internal combustion in cars, but still cannot totally explain the workings of our brain. It is said that if one day we were clever enough to understand our present brains, we still would not be clever enough to understand the brains we would have then. Our understanding of our minds, according to science, is still clumsy and superficial, not nearly as sophisticated as Descartes would have us believe. Therefore, Descartes did manage to produce one (generally) accurate conclusion in the form of extendable, changeable objects, but failed to fully show that our intellect is the source of knowledge nor that we know our minds better than corporeal objects. ...read more.