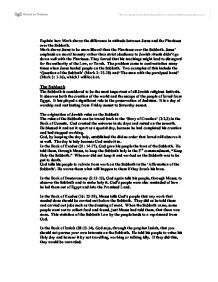 Explain how Mark shows the difference in attitude between Jesus and the Pharisees over the Sabbath.

Explain how Mark shows the difference in attitude between Jesus and the Pharisees over the Sabbath. Mark shows Jesus to be more liberal than the Pharisees over the Sabbath. Jesus' emphasis on moral honesty rather than strict obedience to Jewish rituals didn't go down well with the Pharisees. They feared that his teachings might lead to disregard for the authority of the Law, or Torah. The problem came to confrontation many times when Jesus healed people on the Sabbath. Two examples of this include the 'Question of the Sabbath' (Mark 2: 23-28) and 'The man with the paralysed hand' (Mark 3: 1-16), which I will look at. The Sabbath The Sabbath is considered to be the most important of all Jewish religious festivals. It observes both the creation of the world and the escape of the people of Israel from Egypt. It has played a significant role in the preservation of Judaism. It is a day of worship and rest lasting from Friday sunset to Saturday sunset. The origination of Jewish rules on the Sabbath The rules of the Sabbath can be traced back to the 'Story of Creation' (2:2,3) in the Book of Genesis. God created the universe in six days and rested on the seventh. He blessed it and set it apart as a special day, because he had completed his creation and had stopped working. God, by keeping the day holy, established the divine order that Israel will observe it as well. The day is holy because God made it so. In the Book of Exodus (31: 14-17), God gave his people the laws of the Sabbath. ...read more.

Jewish Faith and Practice The Jewish Religious leaders often called on Jesus to make known his views on the Jewish religion. An example of this is his teaching on the two greatest commandments. In this, he also shows that not all of the Jewish leaders were out of touch with God. Sabbath Laws and Customs Two incidents in which Jesus broke the Sabbath law led to plans being made by the Pharisees and Herodians to murder Jesus to stop his breaches of their 'law'. (a) The Sabbath Corn (Mark 2:23-28)- One day Jesus was walking through the cornfields, where his disciples picked ears of corn as they walked along. The teachers of the law asked Jesus why they were breaking the law of the Sabbath. Jesus replied by asking had they never read what David did in his time of need when his followers were hungry - how he went into the house of God when Abiathar was High Pries and ate the loaves of offering which only the priests are allowed to eat and how he also gave some to the men with him? He told the Pharisees, "The Sabbath was made for man, not for the Sabbath. So the Son of Man is Lord even of the Sabbath." >The Pharisees were claiming that Jesus' disciples were working by preparing a meal on the Sabbath (but it was alright for travellers on any other day to help themselves to corn in a field but they could only take what they could carry in their hands). Jesus defended them by reminding the Pharisees of an incident that concerned the greatest figure in Jewish history, King David. ...read more.

Many employees are lured into working on a Sunday by their employers by extra money. Others are needed to supply the general public with leisure services such as cinemas and leisure centres, which would be popular places on a Sunday. Many people are obliged to take on extra weekend work to supplement low wages. This has meant that parents may spend less time with their children on Sundays. Employers should enable these people to work fewer hours or should be more flexible with weekend shifts in order to solve this problem. Fathers and mothers could also work on different shifts if possible; so at least one of them can spend time with their children at any one time. I believe that Christians and people of other religions should have the freedom to decide how they want of spend their Sunday. Introducing laws restricting Sunday activities would have more negative than positive effects. If people want to shop or to play sport on the Sabbath day, they should be allowed to. People who want to devote the whole of their Sunday to God should also have the freedom to do this. They could be seen as discriminating by ethnic minorities and unfair to the people who don't want to devote their whole Sunday to God. Jesus himself said that 'The Sabbath was made for man, not man for the Sabbath' in Mark 2: 23-28. It is highly unlikely that people would readily accept other restrictions being imposed. Despite oppositions from some of the churches, many traditional rules and restrictions have been relaxed, as they are no longer practical in modern society. There are still a number of Christian churches, which take the biblical laws very seriously. However, this has made many feel that the Churches' role everyday life has no meaning. ...read more.