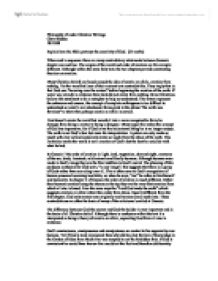 Explain how the Bible portrays the creativity of God andThe creative God of the Bible is similar to Aristotle(TM)s Prime mover discuss.

Philosophy of Judeo Christian Writings Chris Hadden 18/11/08 Explain how the Bible portrays the creativity of God. (25 marks) When read in sequence there are many contradictory statements between Genesis chapter one and two. The origins of the world and order of creation are for example different. Although within the same holy text, the two chapters provide contrasting theories on creation. Many Christian beliefs are based around the idea of creatio ex nihilo, creation from nothing. Yet the very first lines of their ancient text contradict this. They imply that in fact God was "hovering over the waters" before beginning the creation of the earth. If water was already in existence then God did not create from nothing. Some Christians believe this statement to be a metaphor to help us understand. The waters represent the unknown and unseen, the concept of complete nothingness is too difficult to understand so water's are introduced. Some point to the phrase "the earth was formless" to show that perhaps creatio ex nihilo is correct. ...read more.

The difference between God the creator and God the builder is very important and is the basis of all Christian belief. Although there is confusion within the text it is interpreted as being a theory of creatio ex nihilo, separating God from all else in existence. God's omniscience, omnipresence and omnipotence are central to his superiority over humans. Yet if God is truly omniscient then why did he plant the tree of knowledge in the Garden of Eden from which Eve was tempted to eat the forbidden fruit. If God is omniscient he would have known Eve would eat the fruit and therefore deliberately tempted her, if this is correct then it brings in the morality of God. If God knew all this then he deliberately caused Eve pain which would be an evil act, and thus God is not pure goodness, but flawed like the human race. Secondly if God is omnipresence how can he take a physical presence and walk through the Garden of Eden and have a face to face conversation with Adam. ...read more.

They are attracted to his perfection, he takes no action, never intervenes and has no plan for it, and this is why he is perfect. He has no flaws because on a very basic level he never makes a decision that can be "wrong". Morally he also is passive and so therefore can never be evil. Many argue that this inability or refusal to act make the PM an imperfect idea, for he is not perfect but truly neutral. Within the Judeo Christian religions the problem of Evil and suffering is often a reason not to believe or question the beliefs of others. This isn't an issue within the PM theory for, the PM never intervenes and therefore all evil is human made, yet equally so is all goodness within the world. Within the Judeo Christian religions it is equally the ability of God to do good that attracts people to believe as it is the recognition that evil and suffering is a part of life. God has an active role to play within humanities existence whereas the PM is simply an unmoved ideal that all people are attracted to. ...read more.