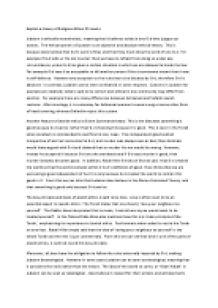 Explain Judaism as a theory of religious ethics

﻿Explain a theory of Religious Ethics 25 marks Judaism is ethically monotheistic, meaning that it believes solely in one G-d who judges our actions. The ethical system of Judaism is an objective and absolute ethical theory. This is because Jews believe that G-d?s word is final, and that they must obey the word of one G-d. for example if G-d tells us ?Do not murder? then we have to refrain from doing so under any circumstances, unless G-d has given a certain situation in which we are allowed to break the law. For example G-d sees it as acceptable to kill another person if the circumstance meant that it was in self-defence. However any exception to the rules has to be dictated by G-d, therefore G-d is absolute. In contrast, Judaism can be seen as relativist in some respects. Customs in Judaism for example are relativist; what is said to be correct and ethical in one community may differ from another. For example there are many differences between Ashkenazi and Sefardi Jewish customs. After marriage, it is customary for Ashkenazi women to wear a wig or some other form of head covering, whereas Sefardim reject this custom. Another feature of Jewish ethics is Divine Command theory. This is the idea that something is good because G-d said so rather than G-d choosing it because it is good. ...read more.

Furthermore, Judaism largely focuses on the life of the mother. For example in Hilkhot Rotzeach we are told ?not to pity the soul of a rodef (pursuer). The baby is the pursuer, and therefore harming the life of the mother and in these circumstances may be terminated. However it too goes on to say ?once the head has emerged, one soul is not set aside for the sake of another?, again recognising when the babies life becomes equal to the mothers. Moreover Rambam places his commentary on abortion under the heading of murder, this primarily illustrates that abortion is seen as wrong. Judaism therefore offers the best approach to issues raised by abortion as it is broad, focusing on both the life of the mother as well as the babie?s. Overall Judaism offers the best approach to issues raised by abortion, as just like utilitarianism it focuses on both the mother and fetus, and is therefore broad in that aspect. However unlike utilitarianism it focuses on the importance of life rather than happiness. The importance of a human beings life is much more crucial than an individual?s happiness. Lastly Judaism tackles a broader set of circumstances, and rather than giving the same answer for all, like utilitarianism is able to apply its beliefs appropriately to ensure the most fitting outcome. ...read more.