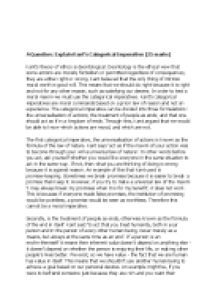 Transfer-Encoding: chunked ﻿A Question: Explain Kant?s Categorical Imperative (25 marks) Kant?s theory of ethics is deontological. Deontology is the ethical view that some actions are morally forbidden or permitted regardless of consequences, they are either right or wrong. Kant believed that the only thing of intrinsic moral worth is good will. This means that we should do right because it is right and not for any other reason, such as satisfying our desires. In order to test a moral maxim we must use the categorical imperatives. Kant?s categorical imperatives are moral commands based on a priori law of reason and not on experience. The categorical imperative can be divided into three formulations: the universalisation of actions; the treatment of people as ends; and that one should act as if in a kingdom of ends. ...read more.

Therefore this cannot be a moral imperative. Secondly, is the treatment of people as ends, otherwise known as the formula of the end in itself. Kant said ?to act that you treat humanity, both in your person and in the person of every other human being, never merely as a means, but always at the same time as an end?. If a person is an end-in-themself it means their inherent value doesn't depend on anything else - it doesn't depend on whether the person is enjoying their life, or making other people's lives better. We exist, so we have value - the fact that we are human has value in itself. This means that we shouldn?t use another human being to achieve a goal based on our personal desires. An example might be, if you were to befriend someone just because they are rich and you want their money. ...read more.

For instance if you tell your friend that he should give to charity and he does so without thinking, then this would be wrong. However if you suggested it to your friend and he uses reason to decide that he will give to charity out of good will, then he has made his own moral judgement as an autonomous human being and this action is right. To conclude, there are three separated elements to Kant?s categorical imperative. These are known as the universal law of nature, the formula of the end in itself and a kingdom of ends. Together these elements help us to decide whether an action or decision about how we live is morally right or wrong. Kant proposes that reflecting on whether the action or decision can be universally applied; whether it treats each person involved as an end (and not a means to an end); and whether it treats every individual as an autonomous human being, allows us to make morally good and reasoned decisions. ...read more.