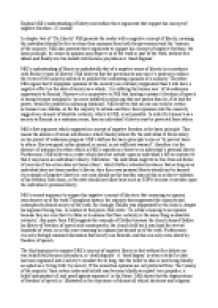 Explain Mills understanding of liberty and outline three arguments that support his concept of negative freedom.

﻿Explain Mill?s understanding of liberty and outline three arguments that support his concept of negative freedom. (15 marks) In chapter two of ?On Liberty? Mill presents the reader with a negative concept of liberty, meaning the individual should be free to retain their opinions from both the government and the ?tyranny of the majority. Mill also presents three arguments to support his concept of negative freedom: the harm principle, to censor an opinion may deprive us of the truth or part of the truth, without free debate and finally our true beliefs will become prejudices or ?dead dogmas?. Mill?s understanding of liberty is undoubtedly that of a negative sense of liberty (in accordance with Berlin?s types of liberty). Mill believes that the government may use it?s powers to enforce the views of the majority and seek to prohibit the contrasting opinions of a minority. Therefore Mill argues that if unpopular opinions of the minority are routinely suppressed than it will have a negative effect on the state of society as a whole, ?it is robbing the human race? of its eudaimon opportunity to flourish. ...read more.

Furthermore, Mill believes in a state which does not intrude upon an individual?s life as contrary to this it may harm an individual?s liberty. Mill states: ?the individual ought to be free from all forms of coercion if his action does not harm others?, which further reiterates his stance that as long as an individual does not harm another?s liberty, then their own personal liberty should not be harmed. An example of negative liberty is: one man should not hit another man as this is in direct violation of his freedom from harm, or the state should not allow laws such as SOPA because it intrudes upon the individual?s personal liberty. Mill?s second argument to support his negative concept of liberty is that censoring an opinion may deprive us of the truth.Throughout history, the majority has suppressed the minority and consequently denied society of the truth: for example Galileo was suppressed by the church, despite his argument being true. In relation to this point, Mill wrote ?To refuse a hearing to an opinion because they are sure that it is false is to assume that their ...read more.