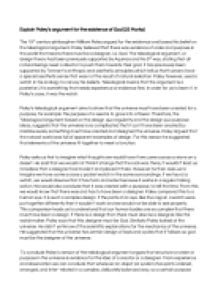 Transfer-Encoding: chunked ﻿Explain Paley?s argument for the existence of God (25 Marks) The 19th century philosopher William Paley argued for the existence and based his belief on the teleological argument. Paley believed that there was evidence of order and purpose in the world that means there must be a designer, i.e. God. The teleological argument, or design theory had been previously supported by Aquinas and his 5th way, stating that all natural beings need a director to push them towards their goal. It has previously been supported by Tennant?s anthropic and aesthetic principles which tell us that humans have a special aesthetic sense that was not the result of natural selection. Paley however, used a watch in his analogy to convey his beliefs. Teleological means that the argument is a posteriori, it is something that needs experience or evidence first, in order for us to learn it. ...read more.

This comparison leads us to understand that our human bodies are so complex that there must have been a design. If there is a design then there must also be a designer, like the watchmaker. Paley says that this designer must be God. Similarly Paley looked at the universe. He didn?t yet know of the scientific explanations for the mechanics of the universe. He suggested that the universe has certain design of laws and cycles that if follows so god must be the designer of the universe. To conclude Paley?s version of the teleological argument argues that structure or order or purpose in the universe is evidence for the idea of a creator or a designer. From experience and observation we can conclude that wherever an object (or system) has parts ordered, arranged, and inter- related in a complex, delicately balanced way, so a certain purpose can be achieved, then the object (or system) ...read more.

Philosophers such as Aquinas, Paley and Tennant all believed that the world was evidence of design, and design means there must be a purpose. Aquinas? fifth way stated that whatever lacked knowledge cannot move towards an end/fulfil its purpose unless of course something else is directing it that has intelligence i.e. God. Paley used the watch analogy, he said like how God created the world, a watchmaker creates watches for a purpose. Finally Tennant said that humans have aesthetic sense which couldn?t have come from evolution and this means that God gave us aesthetic sense for a purpose. In conclusion I would argue that there is more evidence to support the statement that the universe has no purpose than against it. We know through Darwin and science that we have evolved through natural selection and that over millions of years many species have gone extinct. Sciences also predict that the human race will die out and the earth will be engulfed by the sun and destroyed. The arguments against such as the teleological argument are only theories with little evidence and so do not outweigh this. ...read more.