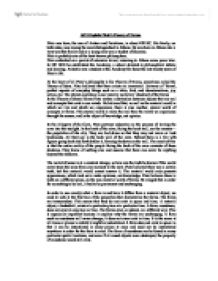 AO1 Explain Plato's Theory of Forms Plato was born, the son of Ariston and Perictione, in about 428 BC. His family, on both sides, was among the most distinguished in Athens. He was born in Athens into a very wealthy family and as a young man was a student of Socrates. Plato is probably one of the best-known philosophers. Plato embarked on a period of extensive travel, returning to Athens some years later. In 387 BCE he established the Academy, a school devoted to philosophical debate and learning. Aristotle was a student at the Academy for about the last twenty years of Plato's life. At the heart of all Plato's philosophy is his Theory of Forms, sometimes called the Theory of Ideas. Plato believed that there exists an immaterial Universe of `forms', perfect aspects of everyday things such as a table, bird, and ideas/emotions, joy, action, etc. The objects and ideas in our material world are `shadows' of the forms In the Theory of eternal forms Plato makes a distinction between objects that are real and concepts that exist in our minds. He believed that, as well as the material world in which we live and which we experience, there is also another, eternal world of concepts or forms. ...read more.

to most particular and subjective. All particular forms are subsumed under more general forms, and all forms are finally subsumed under the form of the Good. By Plato's logic, real knowledge becomes knowledge of goodness. The lowest of forms are images. Plato developed his Theory of Forms by dividing existence into two realms. The world of sense experience, where nothing stays the same and is always changing. There is a world which is outside space and time, which is not perceived through the senses, and in which everything is permanent and perfect, Ideal - the realm of Forms. The empirical world shows only shadows and poor copies of the Forms, and is so less real than the world of the Forms themselves, because the Forms are eternal and immutable, the proper objects of knowledge. The properties of the forms are split into six sections. Transcendent, the forms are not located in space and time. For example, there is no particular place or time at which redness exists. Pure, the forms only exemplify one property. Material objects are impure; they combine a number of properties such as blackness, circularity, and hardness into one object. A form, such as circularity, only exemplifies one property. Archetypes, the forms are archetypes; that is, they are perfect examples of the property that they exemplify. ...read more.

Aristotle believed morality could not be eternal and unchanging simply because moral issues have to respond to such changing situations in both time and place. Aristotle believed that the 'form' for things exists within the things themselves. This comes from experience. Another problem was the uncertainness of what the relation is between the Forms and the objects of everyday experience. Plato equates the Form with knowledge and the 'particulars' with opinion. Opinion can be wrong, but knowledge is infallible. Knowledge exists in the realm of the Forms and is independent of the objects of everyday experience. Plato does not argue that we must dismiss the objects of our senses as completely false because they act as a basis on the long journey towards knowledge. This therefore means Forms would not be completely separate from the particulars. On the whole I believe that Plato's theory is a speculation not to dismiss and there are points, which are very valid and questions our reality and existence. But there criticisms which affect the way we see things; 'what is goodness', this is a changing answer and I believe cannot be answered. Plato does not really present the Forms as a theory; what is the nature of forms? He talks about forms as distinct and separate things that are unchangeable, perfect, eternal and invisible, but what dies it revel about nature? He insists that forms exist independently of the mind but they are invisible to sense. ...read more.