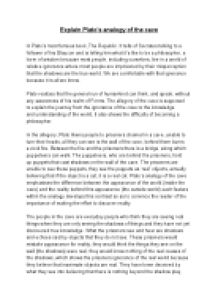 Explain Platos analogy of the cave

﻿Explain Plato?s analogy of the cave In Plato?s most famous book, The Republic. It tells of Socrates talking to a follower of his Glaucon and is telling him what it?s like to be a philosopher, a lover of wisdom because most people, including ourselves, live in a world of relative ignorance where most people are imprisoned by their misperception that the shadows are the true world. We are comfortable with that ignorance because it is all we know. Plato realizes that the general run of humankind can think, and speak, without any awareness of his realm of Forms. The allegory of the cave is supposed to explain the journey from the ignorance of the cave to the knowledge and understanding of the world, it also shows the difficulty of becoming a philosopher. In the allegory, Plato likens people to prisoners chained in a cave, unable to turn their heads, all they can see is the wall of the cave, behind them burns a vivid fire. Between the fire and the prisoners there is a bridge, along which puppeteers can walk. The puppeteers, who are behind the prisoners, hold up puppets that cast shadows on the wall of the cave. The prisoners are unable to see these puppets, they see the puppets as ?real? objects, actually believing that if the object is a cat, it is a real cat. ...read more.

The real version of the word ?cat? (s)he cannot see, to see it (s)he would have to turn his/her head around. Plato?s point is that the rules of our language are not ?names? of the physical objects that we can see. They are actually names of things that we cannot see, things that we can only grasp with the mind. When the prisoners are released, they can turn their heads and see the real objects. Then they realize their error. Plato emphasises that this journey is painful and confusing because it involves rejecting everything that is familiar, like the prisoner we are dazzled and fridgtened by reality. We can come to grasp the Forms with our minds, Plato?s aim is to describe what is necessary for us to achieve a complete understanding, but even without it, it remains true that our very ability to think and to speak depends on the Forms. We use their meaning by ?naming? the Forms that the objects we think they are. The prisoners may learn what a book is by their experience with shadows of cats. But they would be mistaken if they thought that the word ?cat? refers to something that any of them has ever seen because they?re shadows. We may also acquire concepts by our experience of physical objects. But we would be mistaken if we thought that the concepts that we think were on the same level as the things we see. ...read more.

He felt that true knowledge could only be attained through reasoning, and never through experience. Plato did not value any experience of the physical world, as he believed that the senses were easily tricked, and so, as shown in his Allegory of the Cave, we could be fooled into thinking that the "Cave" of the physical world, is the ultimate reality. Experience is the observing, encountering, or undergoing of things, generally as they occur in the course of time. This explains why Plato would dismiss experience as either useless or not to be trusted. He did not believe that, as humans, anything we "observe" through the use of our senses, could be taken as definite fact. It would be absurd to suggest that experience in the physical world is meaningless, because we all live fulfilled lives and would point towards how all scientific discoveries of the past all came about through sensory experience, and have since improved the quality and length of our lives and the way we live (technology) giving us more time to devote to what Plato would call "The Meaning of Life," understanding the Form of the Good. Therefore, it could be said that sensory experience is above our efforts to discover the Good, and it could be said in the case of Plato, where it was his experience of the death of Socrates, that drove him to a life of Philosophy and toward the discovery of the Forms and fundamental knowledge. By Chelsea Turpin ...read more.