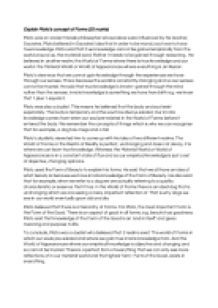 Transfer-Encoding: chunked ﻿Explain Plato?s concept of Forms (25 marks) Plato was an ancient Greek philosopher whose ideas were influenced by his teacher, Socrates. Plato believed in Socrates? idea that in order to be moral, you have to have true knowledge. Plato said that true knowledge cannot be gained empirically from the world around us, the material word. Rather it needs to be gained through reasoning. He believed in another realm, the World of Forms where there is true knowledge and our world- the Material World or World of Appearances where everything is an illusion. Plato?s view was that we cannot gain knowledge through the experiences we have through our senses. ...read more.

Our innate knowledge comes from when our soul pre-existed in the World of Forms before it entered the body. We remember the concepts of things which is why we can recognise that for example, a dog has 4 legs and a tail. Plato?s dualistic views led him to come up with his idea of two different realms. The World of Forms or the Realm of Reality is perfect, unchanging and does not decay, it is where we can learn true knowledge. Whereas the Material World or World of Appearances is in a constant state of flux and so our empirical knowledge is just a set of objective, changing opinions. ...read more.

Plato believed that there is a hierarchy of Forms. For Plato, the most important Form is the Form of the Good. There is an aspect of good in all forms, e.g. beauty has goodness. Plato said that knowledge of the Form of the Good is an ?end in itself? and gives meaning and purpose to life. To conclude, Plato was a dualist who believed that 2 realms exist. The world of Forms in which our souls pre-existed and where we gain true innate knowledge from. And the World of Appearances where our empirical knowledge is objective and changing and so cannot be trusted. There is a perfect form of everything that we can only see mere reflections of in our material world and the highest form- Form of the Good, exists in everything. ...read more.