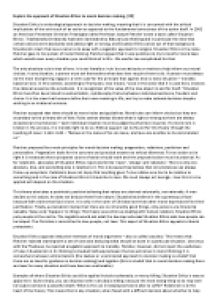 Explain the approach of Situation Ethics to moral decision making.

Transfer-Encoding: chunked ﻿Explain the approach of Situation Ethics to moral decision making. [35] Situation Ethics is a teleological approach to decision making, meaning that it is concerned with the ethical implications of the end result of an action as opposed to the fundamental correctness of the action itself. In 1962 an American Protestant Christian Theologian called Professor Joseph Fletcher wrote a book called ?Situation Ethics?. Traditionally Christianity had been dominated by Natural Law thinking and in particular the view that certain actions were absolutely and always right or wrong, and Situation Ethics arose out of that background. Situationists claim that Jesus came to do away with a legalistic approach to religion. Situation Ethics is the name Fletcher gave to his system of moral thinking. Fletcher argued that it was pointless to try to look for moral laws which would cover every situation you could think of in life - life was far too complicated for that. The only absolute rule is that of love. It is not literally a ?rule? but an attitude or motive to help inform our moral choices. In any situation, a person must ask themselves what does love require them to do. ...read more.

Relativism does not imply that anything goes. To be relative one has to be relative to something and in the case of Situation Ethics it should be to love. We must always act lovingly - how this is to be applied will depend on the situation. This theory also takes a positivistic position believing that values are derived voluntarily, not rationally. A man decides on his values, he does not deduce them from nature. Situationists believe in the supremacy of love because faith claims that God is love. It is only in the norm of Christian love that other moral expressions find their justification. Finally, personalism implies that there are no inherently good things, only persons are inherently valuable. Value only ?happens? to things. This theory sees ethics as dealing with human relations. Situation Ethics puts people at the centre. The Legalists would ask what the law says whereas Situation Ethics asks how people can be helped. The Christian is committed to love people, not laws. This aspect of Situation Ethics appeals to liberal protestants. Situation Ethics opposed deductive methods of moral arguments ? also so called casuistry. ...read more.

Seen in this light, Situation Ethics will start from the belief that it is generally in our interests to create families, nurturing and educating our children. However, in exceptional circumstances the situation might demand a different, loving response. Abortion would be an exception in extreme circumstances, not a method of birth control (as it has become in some countries). The main challenge to situation ethics within Christendom comes from the Roman Catholic Church, who prefer Natural Law. For example, in the case of Jodie and Mary, conjoined twins, the Catholic Church wanted to let both of the girls die. To kill one, saving the other, would be an evil or bad act, they said. Fletcher would have disagreed. Letting both girls die is not pragmatic. It would be of more use, more practical, to save one girl at the expense of the other. Overall, what the situationist does have in advance is a general knowledge of what he should do (love), why he should do it (for God's sake), to whom it should be done (his neighbours). He knows that this love is altruistic, not egoistic and should be exercised towards as many neighbours as possible. To quote the Apostle Paul, ?Love does no wrong to a neighbour, therefore love is the fulfilling of the law.? ...read more.