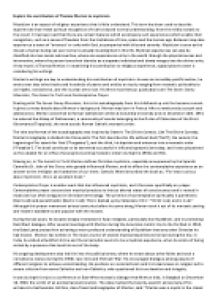 Explain the contribution of Thomas Merton to mysticism

Transfer-Encoding: chunked ﻿Explain the contribution of Thomas Merton to mysticism Mysticism is an aspect of religious experience that is little understood. This term has been used to describe experiences that reveal spiritual recognition of truths beyond normal understanding, from the mildly ecstatic to the occult. It has been said that there are certain features which accompany such experiences which enable their recognition, such as a sense of freedom from the limitations of time, space and the human ego. Believers may also experience a sense of ?oneness? or unity with God, accompanied with bliss and serenity. Mysticism is seen as the closest a human being can ever come to actually meeting God in this life. Mystical experiences can also be classified into two areas: extrovertive, where one experiences unity in the world through the physical senses and introvertive, where the person loses their identity as a separate individual and slowly merges into the divine unity. ...read more.

Like The Divine Comedy, Merton?s biography is divided into three parts: The first describes his life without God (?h**l?); the second, the beginning of his search for God (?Purgatory?); and the third, his baptism and entrance into a monastic order (?Paradise?). The book continues to be extremely successful in influencing mysticism today, and it was pinpointed as the catalyst for an influx of young men joining monastic orders during the 1940s and 50s. Moving on, in The Ascent to Truth Merton defines Christian mysticism, especially as expressed by the Spanish Carmelite St. John of the Cross, who greatly influenced Merton, and he offers the contemplative experience as an answer to the irreligion and barbarism of our times. Catholic World described the book as, ?For those curious about mysticism, this is an excellent book.? Contemplative Prayer is another work that has influenced mysticism, and it focusses specifically on prayer. Contemplative prayer uses ancient mystical practices to induce altered states of consciousness and is rooted in mysticism but often wrapped in Christian terminology. ...read more.

He encouraged dialogue among people of different religions to achieve understanding. His positions on social activism and his broad views on religion led to severe criticism from some Catholics and non-Catholics, who questioned his true devotion and integrity. It was during this trip to a conference on East-West monastic dialogue that Merton died, in Bangkok on December 10, 1968, the victim of an accidental electrocution. The date marked the twenty-seventh anniversary of his entrance to Gethsemani. Ed Rice, close friend and biographer of Merton, said: "Merton was a mystic in the classic sense? His mystical practices were similar to those of most holy men, whether European or Asian. There is a common thread that unites them." Thomas Merton?s mysticism continues to be influential even today. Thomas Merton was the subject of a speech given by Pope Francis during a joint session of Congress in 2015. The Pope referred to Merton as ?a source of spiritual inspiration and a guide for many people? He was also a man of dialogue, a promoter of peace between peoples and religions.? ...read more.