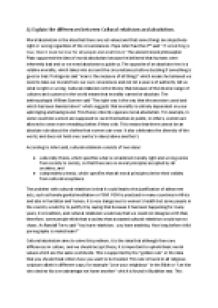 Explain the differences between Cultural Relativism and Cultural Absolutism

﻿A) Explain the differences between Cultural relativism and absolutism. Moral absolutism is the idea that there are set values and that some things are objectively right or wrong regardless of the circumstances. Pope John Paul the 2nd said ? If something is true, then it must be true for all people and at all times? The ancient Greek philosopher Plato supported the idea of moral absolutism because he believed that humans were inherently bad and so we need absolutes to guide us. The opposite of an absolute view is a relative morality, which takes into account the circumstances before deciding if something is good or bad. Protagoras said ?man is the measure of all things? which means he believed we need to take our morals from our own consciences and not let a source of authority tell us what is right or wrong. Cultural relativism is the theory that because of the diverse range of cultures and customs in the world means that morality cannot be absolute. The anthropologist William Sumner said ?The right way is the way that the ancestors used and which has been handed down? which suggests that morality is entirely dependent on your upbringing and background. This theory directly opposes moral absolutism. ...read more.

In conclusion, the differences between cultural absolutism and relativism are significant. Although both accept that our culture may make us have different values, and that our culture is important, cultural relativists maintain that because of our differences in culture, it is possible for us to share no values at all. Cultural absolutists on the other hand, believe that all human beings share a similar code of conduct, and we all have consciences. They believe that this moral code should be applied to all in law. B) ?Nothing is always wrong? Discuss this statement. The belief that there are no absolute values is called Relativism. Relative Morality is the idea of taking into account the circumstances of a situation before deciding how to act, and the belief that what is right and wrong varies depending on these circumstances. Therefore relativists would agree with this statement. However, absolutists would disagree, as absolutism is the idea that there are certain things which are always right or wrong, regardless of the circumstances. One philosopher who pioneered the idea of moral absolutism was Plato. He believed that mankind was inherently selfish and immoral, and so needed a set of absolute rules to guide us. He set out this philosophy in his book Republic, with his analogy called the Ring of Gyges, when a ?just man? is given a ring with grants him the power of invisibility. ...read more.

This is supported by the ?golden rule? or the idea that you should treat others how you want to be treated. This rule is found in all religious scripture albeit in different ways, for example ?Love your neighbour? in the Bible or ?Let him who desires his own advantage not harm another? which is found in Buddhist text. This shows cultural absolutists that all human beings share the same basic values. They believe that it is important for our human rights to be upheld in law if our moral standards fail, and so agree with moral absolutists that some things e.g r**e and murder are always wrong. However cultural relativists would argue that cultural absolutism will create a homogenous culture and lead to a world which is less accepting of those who are different to us. In conclusion, the argument for cultural absolutism is stronger and so I think that the statement is wrong. This is because although it is important to be accepting and understanding of other people?s morals it is also incredibly important to uphold human rights, as they are vital in a democratic society. Freedom of speech is an important right and so cultural absolutism is not taking away people?s right to disagree, or express their opinion, but simply does not allow for abhorrent acts to be justified in the way that cultural absolutism does. ...read more.