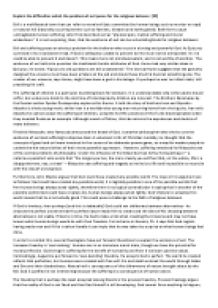 Explain the difficulties which the problem of evil poses for the religious believer.

Transfer-Encoding: chunked ﻿Explain the difficulties which the problem of evil poses for the religious believer. [35] Evil is a multifaceted term that can refer to moral evil (acts committed by human beings such as murder or r**e) or natural evil (naturally occurring events such as famines, diseases and earthquakes). Both forms cause unimaginable human suffering. John Hick described evil as ?physical pain, mental suffering and moral wickedness.? It is not surprising, then, that the existence of evil can be a stumbling block for religious believers. Evil and suffering poses an obvious problem for the believer who trusts in a loving and powerful God. As Epicurus surmised in his inconsistent triad, if God is willing but unable to prevent evil he must not be omnipotent. Or, he could be able to prevent it and doesn?t. This means he is not omnibenevolent, and is not worthy of worship. The existence of evil calls into question the traditional theistic attributes of God. Hume had very similar ideas to Epicurus, he wrote, ?Epicurus's old questions are still unanswered.? The ironical Hume suggests that the god who designed the universe must have been a failure at the job and should have tried his hand at something else. ...read more.

A vehement critic of Christian morality, he thought that the concepts of good and evil were invented in the course of an elaborate power-game, as a way for weaker people to undermine the natural drives of their more powerful oppressors. However, suffering remained for Nietzsche one of the central problems of philosophy. Under the influence of his fellow German Arthur Schopenhauer ? a notorious pessimist who wrote that "the longer you live, the more clearly you will feel that, on the whole, life is a disappointment, nay, a cheat" ? Nietzsche saw suffering and tragedy as intrinsic to life and impossible to reconcile with the idea of a loving God. Furthermore, John Mackie argues that God could have created any possible world. The steps in his argument are as follows: God could have created any possible world, it is logically possible in one of the possible worlds that free human beings always acted rightly, therefore there is no logical contradiction in saying that in another of the possible worlds God could have created, ALL human beings always acted rightly. ...read more.

Contrastingly, Augustine put forward a ?soul-deciding? theodicy. He accepts God is perfect. The world he created reflects that perfection, but humans were created with free will. Sin and death entered the world through Adam and Eve and their disobedience. Natural evil is consequence of this disharmony of nature brought about by the fall. God is justified in not intervening because the suffering is a consequence of human action. The theodicy that is perhaps the least accepted among theists is the process theodicy. Process theology argues that the reality of God is not fixed and that God himself is still developing. God cannot force anything to happen, but rather only influence the exercise of this universal free will by offering possibilities. The possibility of evil has always existed. Ultimately, the question surrounding the origin of evil and suffering will never truly be solved with our fallible human understanding. Suffering needs to be understood in the overall context of God?s omniscient plan. Finite beings cannot understand. Suffering could be a punishment, or a tool to bring us closer to God. To quote Joseph Conrad, "The belief in a supernatural source of evil is not necessary; men alone are quite capable of every wickedness.? ...read more.