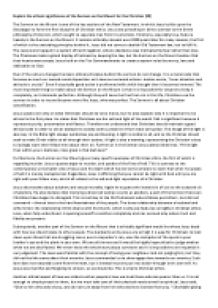 Transfer-Encoding: chunked ﻿Explain the ethical significance of the Sermon on the Mount for the Christian (35) The Sermon on the Mount is one of the key sections of the New Testament, in which Jesus builds upon the Decalogue to form the first blueprint of Christian ethics. Jesus was preaching in direct contrast to the Greek philosophy of stoicism, which sought to separate man from his emotions. Emotions, especially love, feature heavily in the Sermon on the Mount. It remains ethically relevant over 2000 years later for many reasons, the first of which is the underlying principles behind it. Jesus did not come to abolish Old Testament law, but to fulfil it. The Jews were trapped in a system of harsh legalism, where obedience was motivated by fear rather than love. The Pharisees made a grand display of holiness by keeping the law, but the Sermon on the Mount teaches that their hearts were empty. Jesus built on the Ten Commandments to create a system ruled by mercy, love and dedication to God. Even if the culture changes the basic ethical principles behind the sermon do not change. ...read more.

Regardless, Jesus is affirming that you cannot be right with God until you are right with your fellow men, which all relates to the salt-and-light reputation of a Christian. Jesus also teaches about adultery and s****l morality. Again he equates the inward sin of l**t to the outward sin of adultery. He also declares that marrying a divorced woman counts as adultery, a part of the Sermon that even Christians have begun to disregard. This is contrary to the Old Testament where Moses permitted ? but did not command ? divorce due to the hard heartedness of the people. The close relationship between a husband and wife mirrors the relationship Christ shares with his Church, which is why s*x features so highly in Christian ethics. Love, when fully understood. Is opening oneself to another completely and can succeed only where trust and fidelity are present. Subsequently, another part of the Sermon on the Mount that is ethically significant would be where Jesus deals with how we should relate to other people. The standards set by Jesus are so high it is easy for Christians to look down upon those that are struggling. ...read more.

He warns of false prophets who will come in sheep?s clothing; in this situation the ethics presented in the Sermon on the Mount are vital so a Christian can identify who is a true believer. We are not saved by works, but they are an important part of our Christian identity. The Sermon on the Mount also has certain evangelical tones throughout. It shows the unbeliever what is required of them if they follow Jesus, and the severe consequences if they do not. Spurgeon wrote of this passage, ?The shepherd best discerns his own sheep, and the Lord, Himself alone knows infallibly them who are His.? To conclude, there are conflicting theories regarding the nature of the Sermon ? certain theologians such as Calvin believe it is a compilation of many separate sermons. Others debate technical details, such as whether it was preached on a mount or a plain. However, something that every Christian will agree on is that the Sermon on the Mount is of the upmost important as a foundation for Christian ethics. Stott said, ?The Sermon on the Mount is probably the best-known part of the teaching of Jesus, thought arguably it is the least understood, and certainly it is the least obeyed.? ...read more.