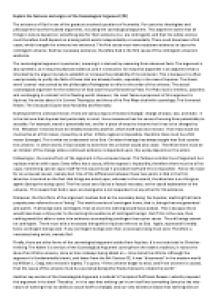 Explain the features and origins of the Cosmological Argument

Transfer-Encoding: chunked ﻿Explain the features and origins of the Cosmological Argument (35) The existence of God is one of the greatest unsolved questions of humanity. For centuries theologians and philosophers have formulated arguments, including the cosmological argument. This argument claims that all things in nature depend on something else for their existence (i.e. are contingent), and that the whole cosmos must therefore itself depend on a being which exists independently or necessarily. There must have been a first cause, which brought the universe into existence. This first cause must have necessary existence to cause the contingent universe. God has necessary existence, therefore God is the first cause of the contingent universe's existence. The cosmological argument is posteriori, meaning it is derived by reasoning from observed facts. The argument is also synthetic, as it requires physical evidence, and it is inductive. An inductive argument is an argument that is intended by the arguer merely to establish or increase the probability of its conclusion. This is because it is often used primarily to justify the faith of those that are already theists, especially in the case of Aquinas. ...read more.

This is what we understand to be God. Christian theology has always taught that God sustains the universe. In other words, if God ceased to exist then the universe would also cease. Therefore there must be an initiator of the change whose continued existence is depended upon, like a play depends on the actors. Following on, the second form of the argument is the uncaused causer. This follows a similar line of argument but replaces motion with cause: Every effect has a cause; infinite regress is impossible; therefore there must be a first cause. Something cannot cause itself for this would mean it preceded itself and this is impossible. Hence the need for an uncaused causer, namely God. One of the differences between these two points is that in the first, attention is centred on the fact that things are acted upon, whereas in the second, the attention is on things as agents (doing the acting upon). The first cause sees God as a factual necessity, as the causal explanation to the universe. This means that God is seen as a being who is not dependent on any other for His existence. ...read more.

Although the argument is fundamentally Islamic, and dates from the 9th Century CE, it was ?discovered? in the western world by William L. Craig, who revised it slightly. To quote, ?If the universe began to exist, and if the universe is caused, then the cause of the universe must be a personal being who freely chooses to create the world.? Another key version of the Cosmological Argument is Leibnizt?s Principle of Sufficient Reason. Leibnitz proposed this argument in his book ?Theodicy?, in it he says that nothing can?t turn itself into something (since by the very nature of nothing it has no ability to cause itself to change), and our very existence shows that nothing did turn into something, there must have been some external force which caused it to do so. The final key version of the Cosmological Argument is Richard Swinburne and his application of Oakham?s Razor. Richard Swinburne says that God is quite simply the easiest explanation for everything. This is the principle that if a single self-sufficient explanation for can be found, then there is no gain in exploring other more complex explanations; Swinburne expresses this himself in the following quote: ?There could be no simpler explanation than one which postulates only one cause. Theism is simpler than polytheism.? ...read more.