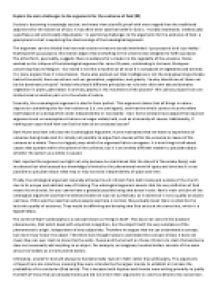 Transfer-Encoding: chunked ﻿Explain the main challenges to the arguments for the existence of God (35) Society is becoming increasingly secular, and many view scientific proof with more regard than the traditional arguments for the existence of God. It has often been said that belief in God is, ?morally intolerable, intellectually superfluous and emotionally dispensable.? In examining challenges to the arguments for the existence of God, a good place to start is exploring the shortcomings of the teleological argument. The argument can be divided into two main sections that are closely interlinked: ?qua purpose? and ?qua reality.? Starting with qua purpose, this branch argues that everything in the universe was designed to fulfil a purpose. The other form, qua reality, suggests there is evidence for a creator in the regularity of the universe. Hume worked on his critique of the teleological argument for some 25 years, culminating in his book, Dialogues concerning Natural Religion. ...read more.

Some scholars have argued that Aquinas' arguments rest on assumptions that are no longer widely held, such as a hierarchy of causes. Additionally, if nothing can cause itself how can God be seen as an uncaused causer? Both Hume and Kant criticised the Cosmological Argument. Hume maintained that we have no experience of universes being made and it is simply not possible to argue from causes within the universe to causes of the universe as a whole. There is a logical jump which the argument fails to recognise. It is one thing to talk about causes that operate within the system of the universe, but it is an entirely different matter to speculate about whether the system as a whole is caused. Kant rejected the argument outright not only because he maintained that the idea of a ?Necessary Being? was incoherent but also because our knowledge is limited to the phenomenal world of space and time and it is not possible to speculate about what may or may not exist independently of space and time. ...read more.

Therefore he argues that we can understand a concept, but never truly ?know? the object. Therefore even though humans understand the concept of God, it does not mean they can ever claim to know that he exists. Russel and Hume built on these criticisms to claim that existence does not necessarily add anything to an object. For example, an imaginary hundred dollars consists of the same amount of dollars as a real hundred dollars. Ultimately, a belief in God will always be fundamentally routed in faith rather than philosophy. The arguments critiqued here are inductive, meaning they were intended by the arguer merely to establish or increase the probability of its conclusion (God exists). This is because both Aquinas and Anselm were writing primarily to justify the faith of those that are already theists and did not intent their arguments to convince atheists into conversion. ...read more.