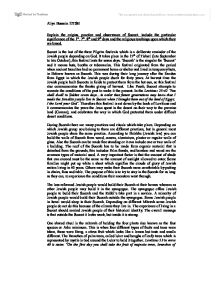 Explain the origins, practice and observance of Succot, include the particular significance of the 1st, 7th, 8th and 9th days and the religious teachings upon which they are based.

Explain the origins, practice and observance of Succot, include the particular significance of the 1st, 7th, 8th and 9th days and the religious teachings upon which they are based. Succot is the last of the three Pilgrim festivals which is a deliberate reminder of the Jewish people depending on God. It takes place in the 15th of Tisheri (late September to late October); this festival lasts for seven days. 'Succah' is the singular for 'Succot' and it means huts, booths or tabernacles. This festival originated from the period when ancient Israelites had no permanent home or shelter and lived in temporary huts, in Hebrew known as Succah. This was during their long journey after the Exodus from Egypt in which the Jewish people dwelt for forty years. At harvest time the Jewish people built Succots in fields to protect them from the hot sun, so this festival also commemorates the thanks giving of harvest. Like Pesah, Succot attempts to recreate the conditions of the past to make it the present. In the Leviticus 23:42 'You shall dwell in Sukkot seven days...in order that future generations may know that I made the Israelite people live in Succot when I brought them out of the land of Egypt, I the Lord your God'. Therefore this festival is set down by the book of Leviticus and it commemorates the years the Jews spent in the desert on their way to the promise land (Canaan), and celebrates the way in which God protected them under difficult desert conditions. ...read more.

The Branches of palm trees, called lulav and boughs of leafy trees which is represented by myrtle is tied around the Lulav to hold it together. Leviticus 23 in verse 40 it states "On the first day you shall take the fruit of majestic trees, branches of palm trees, boughs of leafy trees, and willows of the brooks: and you shall rejoice before the Lord your God for seven days". The Jewish people then shake the Lulav in all directions which are north, south, east and west. It is also shaken up and down three times and says the prayers of thanksgiving to God for all the good things we got from the earth. This is preceded everyday on the festival. These four species were most likely chosen for thanksgiving ritual as they were seen rich during the ancient Israelite period. Whereas as others may say that it resembles differences among people. Different types of people were brought together during Succot just like the way the four species are. This ritual clearly shows the thanksgiving of the fertile land and the final harvest. This festival is also referred to as Chag Ha-Asif or the festival of ingathering. Jewish people are obliged by God to be happy during this festival this is why Succot is called Zman Simhatenu- the season of rejoicing. Joy on Succot is referred to three times in the Torah: "You shall rejoice before the lord your God seven days", "You shall have nothing but joy" and "You shall rejoice on your festival". ...read more.

In ancient Israel before the temple was destroyed in Jerusalem, Jewish people would bring an offering on this day to the temple. As the temple is now destroyed the rituals are liturgical. The 9th day which follows up straight after Shimini Atzaret is part of this day. It is called Simchat Torah; this is significant as it is the rejoicing after the Torah cycle has been finished. This is very important as it reminds Jewish people that the Torah is an on going cycle which will never end. This day is very joyful as the love for the Toarah is openly expressed. "On the ninth day we celebrate Simchat Torah, meaning rejoicing in the Toarh". In Israel Simchat Torah is celebrated on the first and only day of Shemini Atzeret, Liberal Jewish people would also celebrate Simchat Torah on the same day. In conclusion I conclude that the 1st, 7th, 8th and 9th day of Succot are equally as important as each other. They each have there importance as they all teach different teachings. However it is not just the days that only play a major role in this festival but it is also the rituals that takes place, for example the four species. The important of living in the Succah is for the sake of it but also because God commanded the Jewish people to. The overall message which is given in this festival is to thank and praise God for his majesty and benevolence. ?? ?? ?? ?? Aliya Hussain 12TSH ...read more.