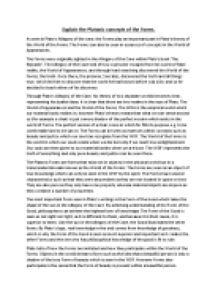 Explain the Platonic concepts of the Forms.

The World of the Forms is the world in which our souls reside when we die but only if we reach true enlightenment. Our souls are then given to our material bodies when we are born. The WOF represents the truth of everything and only pure beauty and justice can be seen there. The Platonic Forms are forms that exist not in objects in the physical world but in a transcendental realm known as the World of the Forms. The Forms are seen as an object of true knowledge which can only be seen in the WOF by the spirit. The Forms have several characteristics such as that they are transcendent as they are not located in space or time. ...read more.

Plato tells of how the Forms are imitated and how they participate within the World of the Forms. Objects in the world imitate a form such as the idea that a beautiful person is only a shadow of the true Form of beauty which is seen in the WOF. However Forms also participate in the sense that the Form of beauty is present within a beautiful person. The evidence of the Platonic concepts of the Forms presents an idea of objects that represent the true form of what is seen as beauty and truth within the physical world. However they cannot be seen nor experienced by the material body but only by an enlightened soul within the World of the Forms. ...read more.