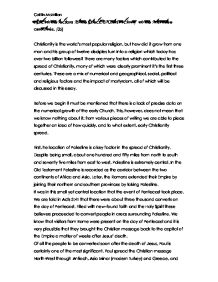 Explain the reasons for the spread of Christianity in the first three centuries.

Explain the reasons for the spread of Christianity in the first three centuries. (35) Christianity is the world's most popular religion, but how did it grow from one man and his group of twelve disciples turn into a religion which today has over two billion followers? There are many factors which contributed to the spread of Christianity, many of which were clearly prominent it's the first three centuries. These are a mix of numerical and geographical, social, political and religious factors and the impact of martyrdom, all of which will be discussed in this essay. Before we begin it must be mentioned that there is a lack of precise data on the numerical growth of the early Church. This, however, does not mean that we know nothing about it; from various pieces of writing we are able to piece together an idea of how quickly, and to what extent, early Christianity spread. First, he location of Palestine is a key factor in the spread of Christianity. Despite being small, about one hundred and fifty miles from north to south and seventy five miles from east to west, Palestine is extremely central. ...read more.

Not only did the actions of the Christians appeal to the people, but also the message they were teaching. The Christian message is one of equality; the thought of slaves and masters being greatly appealed to the lower classes. The upper classes were also persuaded by this message of equality. The Bible teaches that men and women are equal and says that a husband must treat his wife well. This appealed to the prominent women who then converted their husband. Again we turn to Chadwick who claims that it was through women that Christianity 'penetrated the upper classes of society.' Factors outside of the Christians hands also helped the spread of Christianity. During these times the Roman Empire was going through a period of peace, Pax Romana, which greatly helped the spread of Christianity. Being void of distractions such as war, the Romans could turn their attention to other matters. This allowed them to build roads so good many of them are still being used thousands of years later. These roads literally paved the way for the early evangelists and missionaries. Also, the Roman soldiers, with no wars to fight, were able to guard these roads, ensuring safe travel. ...read more.

Despite this early acceptance of Christianity by the Jews, they soon distanced themselves from the Christians, viewing them as something close to a blasphemous cult. Once the Jews had denounced Christianity, persecution and martyrdom became commonplace. The martyrdom of Christians, however, actually helped rather than hindered the spread of Christianity. After the martyrdom of Polycarp we are told that the crowd 'marvelled at the mighty difference between the unbelievers and the elect'. As crowds viewed the strength God provided Blandina during her martyrdom it was inevitable that they would marvel at the power of God and the strength of the martyrs' faith. This helped to both convert non-believers and to affirm the faith of those who were already Christians, providing them with the need to spread the Christian message. Indeed, there were many reasons for the spread of Christianity; some due to the actions of the Holy Spirit, some due to the actions of the early Christians and others that were entirely out of their control. However, it must be said that without the faith of those preaching the message and the acceptance of it by those who heard it, the spread of Christianity could never have been a success. Caitlin McMillan ...read more.