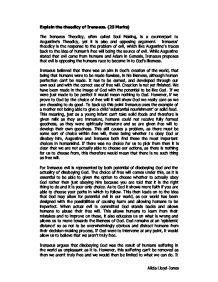 Explain the theodicy of Irenaeus. Irenaeus theodicy is the response to the problem of evil, which like Augustines traces back to the idea of humans free will being the source of evil.

Explain the theodicy of Irenaeus. (25 Marks) The Irenaeus Theodicy, often called Soul Making, is a counterpart to Augustine's Theodicy, yet it is also and opposing argument. Irenaeus' theodicy is the response to the problem of evil, which like Augustine's traces back to the idea of human's free will being the source of evil. While Augustine stated that evil came from humans and Adam in Genesis, Irenaeus proposes that evil is opposing the humans race to become in to God's likeness. Irenaeus believed that there was an aim in God's creation of the world, that being that humans were to be made flawless, in his likeness, although human perfection can't be made. It has to be earned, and developed through our own soul and with the correct use of free will. Creation is not yet finished. We have been made in the image of God with the potential to be like God. ...read more.

For Irenaeus evil is represented by both potential of disobeying God and the actuality of disobeying God. The choice of free will comes under this, as it is essential to be able to given the option to choose whether to actually obey God rather then just obeying him because you are told that it is the right thing to do and it is your only choice. As to God it shows more faith if you are able to choose your paths in which to follow. This then leads on to the idea that God may allow for potential evil in our world, as our world has been designed with the possibilities of causing harm and allowing humans to be imperfect. When actual evil is committed God stands backs and allows humans to abuse their free will. This allows humans to learn from their mistakes and to improve on these, it also educates us on what is wrong and allows us to move towards the likeness of God. ...read more.

When we achieve this potential or likeness with God we will be able to be reunited with him, as we have spiritually developed a relationship with him and we are now complete. For someone like an atheist they would always remain in the image of God as they have evolved rationally but they just don't have that relationship with him. It is clear that Irenaeus' theodicy has a great importance in that it attempts to deal with the difficult problems faced with the existence of evil in the world. Like with Augustine's theodicy it emphasises the importance of free will to humans and uses it as an explanation to why there is evil in the world. It is clear to me that most people learn from their mistakes, this is something God allows and wants them to do. The idea of soul making in order to achieve God's likeness reflects this idea also, in that people learn from their experiences with making mistakes. Alicia Lloyd-Jones ...read more.