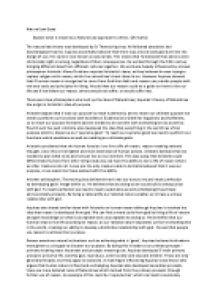 Explain what is meant by a Natural Law approach to ethics

﻿Natural Law Essay Explain what is meant by a Natural Law approach to ethics. (25 marks) The natural law theory was developed by St Thomas Aquinas. He followed absolutist and deontological theories. Aquinas essentially believed that there was a moral code god built into the design of use, this code is now known as natural law. This means that he believed that actions were intrinsically right or wrong, regardless of their consequences. He worked through the 12th century bringing different ideas from different cultures together. His work was heavily influenced by a Greek philosopher Aristotle. Many Christians rejected Aristotle's ideas, as they believed he was trying to replace religion with reason, which the natural law's basic ideas lie on. However Aquinas showed that if human reason is recognised to come from God then faith and reason can provide people with the best tools and principles for living. He said that our reason could be a guide on how to live our life and if we follow our reason, others would not suffer, or would suffer less. There were two philosophers who built up the idea of Natural Law; Aquinas?s theory of Natural law has origin in Aristotle?s idea of purpose. ...read more.

Another philosopher, Thomas Aquinas believed that it was our duty to try and reach perfection by developing god?s image within us. He believed that by doing so we could build a strong union with god. To reach perfection we need to reach eudemonia as well as following the primary and secondary precepts. By living a rational life our rational nature enables us to have a unique relationship with god. Aquinas also shared similar views with Aristotle on human reason although Aquinas?s involved the idea that reason is developed from god. We can find a moral code from god by living a life of reason and gain knowledge on what is acceptable and unacceptable by doing so. He identified that our function was to live life according to reason, as our rational nature separates us from everything else in the world, creating our ability to develop a distinctive relationship with god. He said that people use reason to achieve their purpose. Reason examines natural inclinations such as achieving what is ?good?, Aquinas believed inclinations were given to us by god to discover our purpose. ...read more.

We can do wrong when instead of aiming for the highest goods we get lost and settle for lesser goods. Divine and eternal law are laws which help us understand natural law. Eternal law is the principle by which god made and controls the world, including scientific laws and moral laws. Just as god controls the world he controls us as individuals, he created human nature which has been developed by our reason. Divine law is how the bible reflects on eternal law. Aquinas says to make the right decisions we must set our hearts on god and seek his will. We must check and supplement natural law with divide law and try and follow the bible to make the right decisions which god wants us to make. In summary, a natural law approach to ethics consists of several different idea?s which were developed over time according to their cultural context. Aquinas being the creator of natural law based many of his ethical ideas on Aristotle?s approach to human reason. Aristotle suggest that human were built with a function and a purpose to fulfil, which Aquinas then developed and said these came from god and to reach these we had to follow a moral code. ...read more.