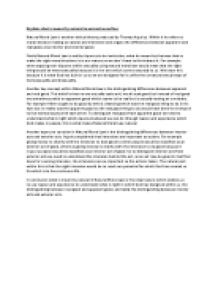 Explain what is meant by natural in natural moral law

﻿Explain what is meant by natural in natural moral law Natural Moral Law is another ethical theory produced by Thomas Aqunius. Within it he refers to moral decision making as natural and instinctive and argues the differences between apparent and real good, plus interior and exterior good. Firstly Natural Moral Law is said by Aqunius to be instinctive, what he meant by that was that to make the right moral decisions is in our nature so we don?t have to think about it. For example when arguing over disputes within sexuality using natural moral law would mean that the right thing would be heterosexuality because it is the one which comes naturally to us. ...read more.

For example Hitler sought to do good by ethnic cleansing which was the real good thing to do in his eyes but in reality was the apparent good as the real good thing to do would have been for everyone to live harmoniously with each other. To distinguish real good from apparent good we need to understand what is right which Aqunius believed we can do through reason and experience which God makes in people, this is what makes Natural Moral Law natural. Another aspect to consider in Natural Moral Law is the distinguishing differences between interior acts and exterior acts. ...read more.

So to distinguish interior acts from exterior acts we need to understand the intension behind the act, as an act may be good in itself but done for a wrong intension, the intensions are as important as the actions taken. The natural part within this is that the right intension would be to reach are potential for which God has created us for which is to live a virtuous life. In conclusion what is meant by natural in Natural Moral Law is the ideal nature which enables us to use reason and experience to understand what is right in which God has designed within us, the distinguishing between real good and apparent good, and lastly the distinguishing between interior acts and exterior acts. ...read more.