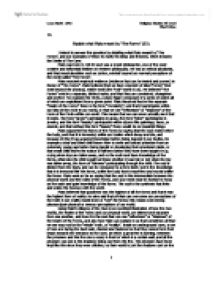 1A Explain what Plato meant by "The Forms" (33) I intend to answer this question by detailing what Plato meant by "The Forms", and use examples of these to clarify his ideas and theories, which includes the Simile of The Cave. Plato was born in 428 BC and was a Greek philosopher, one of the most creative and influential thinkers in Western philosophy. He was an ethical absolutist, and that moral absolutes such as justice, existed beyond our normal perceptions of the world called "The Forms". Plato rejected empirical evidence (evidence that can be tested and proven) in favour of "The Forms". Plato believed that we have concepts of ideal "Forms" that exist beyond the physical, visible world (the "real" world to us). He believed "The Forms" exist in a separate, distinct realm, and that they are consistent, changeless and perfect. For example the Circle, a plane figure composed of a series of points all of which are equidistant from a given point. Plato theorized that in this separate "Realm of the Forms" there is the form "circularity", and that it participates within our idea of the circle in our world, or that we see "reflections" or "shadows" of the Form of the Circle within our world. ...read more.

the Realm of the Forms, and also how Plato can explain to us that sometimes all that we see may not be the "whole" truth, or "reality". Inside an underground cave, a row of men are facing the back wall, chained and fastened so that they cannot turn their heads towards the entrance to the cave, at which a great fire is burning. Between the prisoners and the fire runs a road, in front of which is a curtain wall, and all the prisoners can see is the shadows being cast from the fire. The prisoners have been kept like this since they were children, so their world is just the shadows cast on the wall in front of them and the voices of men that are walking up and down the road carrying various objects. And so this is the reality of the prisoners, and all they believe is that the shadows of the objects and the echoes were the truth, but one of them breaks free, and clambers up the steep, rugged ascent, towards the entrance of the cave. He is blinded at first, as all his eyes have been accustomed to is the dark shadows of the cave, but as he gradually regains his sight he can see all around him, the fire, the men, the "real" world. ...read more.

The allegory of the cave has shown us that we cannot trust our senses, which leads many of us to question, is our world real? Are the things we see, touch, smell, hear and taste real? Many would say yes, as we can use our sensory perceptions to "grasp" the physical world. Plato would say that this is untrue as we need to overcome pleasure/pain physical or sensory perceptions of our world to understand or "see" the realm of the forms and that the soul is more real than the objects we experience through our sensory perceptions as our soul lives on, and is consistent whereas "physical" objects do not. Others would argue that because our reality changes and develops it is real. There is no physical or scientific evidence that the Forms exist, they only exist within our minds, and not in the physical world therefore they are of no help to understand it, and that the forms explain the realm they are in but no understanding of it. All these things lead people to ask the questions, was Plato mad? Did he really understand his own theory? Does the Realm of The Forms actually exist, or is our world a "reflection" or "shadow" of a perfect form? Or maybe neither of the two worlds actually exists, and so one world cannot be more "real" than another? Laura North 12M2 Religious Studies AS Level Miss McGee 1 ...read more.