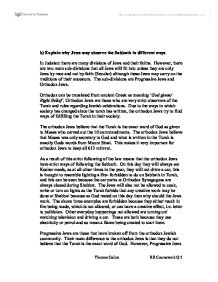 Explain why Jews may observe the Sabbath in different ways

b) Explain why Jews may observe the Sabbath in different ways In Judaism there are many divisions of Jews and their faiths. However, there are two main sub-divisions that all Jews will fit into unless they are only Jews by race and not by faith (Secular) although these Jews may carry on the traditions of their ancestors. The sub-divisions are Progressive Jews and Orthodox Jews. Orthodox can be translated from ancient Greek as meaning 'God given/ Right Belief', Orthodox Jews are those who are very strict observers of the Torah and rules regarding Jewish celebrations. Due to the ways in which society has changed since the torah has written, the orthodox Jews try to find ways of fulfilling the Torah in their society. ...read more.

The Jews will also not be allowed to cook, write or turn on lights as the Torah forbids that any creative work may be done at Shabbat because as God rested on this day then why should the Jews work. The above three examples are forbidden because they either result in fire being made, which is not allowed, or can have a creative effect, i.e. letter to politician. Other everyday happenings not allowed are turning on/ watching television and driving a car. These are both because they use electricity or petrol and so mean a flame being created to start them. Progressive Jews are those that have broken off from the orthodox Jewish community. Their main difference to the orthodox Jews is that they do not believe that the Torah is the exact word of God. ...read more.

Some progressive Jews might not follow kosher meals although many still will. Others will still drive to work, light a lamp or write a letter. The items that are forbidden in the Talmud are known as 'Melachah', which translates as 'work', this is because Jews are supposed to abstain from work on the Sabbath. Another main difference would be in the Synagogue. The service would often be in the vernacular language, whereas in orthodox synagogues the service is often in Hebrew, women would sit with men and sometimes there may be a female rabbi. However even with these difference s the fundamentals of Orthodox and Progressive Jews is the same. These are the family and the centrality of the Sabbath to the continuation of the Jewish faith. ?? ?? ?? ?? Thomas Cullen RE Coursework Q 2 ...read more.