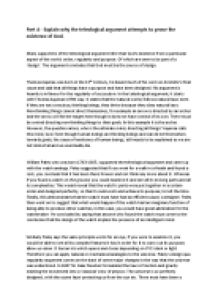 Explain why the teleological argument attempts to prove the existence of God.

Transfer-Encoding: chunked ﻿Part A - Explain why the teleological argument attempts to prove the existence of God. Many supporters of the teleological argument infer that God?s existence from a particular aspect of the world: order, regularity and purpose. Of which are seen to be part of a ?design?. The argument concludes that God must be the source of design. Thomas Aquinas was born in the 13th Century, he based much of his work on Aristotle?s final cause and said that all things have a purpose and have been designed. His argument is heavily is in favour for the regularity of succession. In the teleological argument, it starts with Thomas Aquinas?s fifth way. It states that the natural world, follows natural laws even if they are not conscious, thinking beings, they thrive because they obey natural laws. Non-thinking things cannot direct themselves, for example an arrow is directed by an archer and the arrow will hit the target even though it does not have a mind of its own. ...read more.

Finally, this demonstrates that the watch must have had an efficient cause; a designer. Paley then went on to suggest that what would happen if the watch had an imaginary function of being able to produce other watches, in this case, you would have great admiration for the watchmaker. He concluded by saying that anyone who found the watch must come to the conclusion that the design of the watch implies the presence of an intelligent mind. Similarly Paley says the same principle works for an eye, if you were to examine it, you would be able to see all its complex features it has in order for it to carry out its purpose; allow us vision. It has an iris which opens and closes depending on if it?s dark or light. Therefore you can apply natural or mechanical analogies to the universe. Paley?s design qua regularity argument comes on the back of some major changes in the way that the universe was understood. ...read more.

There is also Tennant (1866-1957) who talks about the Anthropic Principle (if the world had been slightly different we wouldn?t exist, we fit so well into it that it seems to have been designed for us) and says only God can provide an accurate explanation for why humans can contemplate the universe and appreciate the beauty of something and their place within the universe, and human morality. He says that human life is the result of God?s plan or at least the current stage of Gods plan. Overall, Tennant states that the universe is not chaotic and was designed in such a way that the evolutionary process would create an environment, which intelligent design could exist. In conclusion, many philosophers have argued that the universe has not come about into its present state of its own accord, but that the universe demonstrates clear evidence of an intelligent designer behind its existence. Therefore this intelligent designer, could easily be God and even though we do not know this for a fact, the evidence shown is a clear indicator that there is a design and there is a possibility this designer may be God. ...read more.