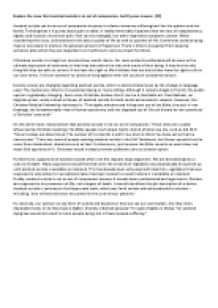 Explore the view that assisted suicide is an act of compassion. Justify your answer. [15]

Transfer-Encoding: chunked ï»¿Explore the view that assisted suicide is an act of compassion. Justify your answer. [15] Assisted suicide can be an act of compassion because it relieves immense suffering both for the patient and the family. Thinking that it is purely about pain is naïve, in reality terminally ill patients fear the loss of independence, dignity and function more than pain. Pain can be managed, but other regressive symptoms cannot. When considering this issue, utilitarianists think about quality of life as well as quantity of life. Sometimes assisted dying may be necessary to produce the greatest amount of happiness. There is little to be gained from keeping someone alive when they are dependent on machines to carry out basic functions. ...read more.

Although it remains illegal in the UK, the public opinion is gradually changing. Even some Christians believe that it can be a charitable act. Paul Badham, an Anglican priest, wrote a book in favour of assisted suicide for both social and economic reasons. However, the Christian Medical Fellowship dismissed it: ?The highly selective and infrequent use of the Bible, the pick 'n' mix theology, the fundamentalist view of human autonomy, and the slapdash use of Church history do not constitute a 'Christian' case at all.? On the other hand, many believe that assisted suicide is not an act of compassion. These views are usually influenced by Christian teaching. ...read more.

Finally, assisted suicide is not an act of compassion because it breaks down professional and legal norms. Doctors are supposed to be preservers of life, not bringers of death. It would transform the job description of a doctor. Assisted suicide is contrary to the Hippocratic oath, which sets forth certain ethical standards for doctors ? including, ?you will exercise your art purely for the cure of your patients.? To conclude, our opinion on any form of suicide will depend on how we see our own bodies. Are they mere disposable tools, or do they have a higher, divinely ordained purpose? To quote Dignity in Dying, ?An assisted dying law would not result in more people dying, but in fewer people suffering.? ...read more.