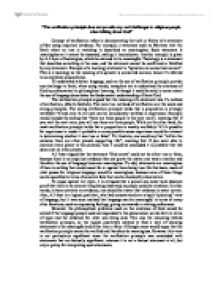 "The verification principle does not provide any real challenges to religious people when talking about God" Concept of verification refers to demonstrating the truth or falsity of a statement of fact using empirical evidence. For example, a statement such as Martians visit the Earth when no one is watching is described as meaningless. Such statement is meaningless as it cannot be assessed, making it inconclusive. Another example is given by A.J Ayer of tautologies, which he claimed to be meaningful. Tautology is a statement that describes something is the case, and the statement cannot be confirmed or falsified by any statement. Example of a tautology statement is "spinsters are unmarried women". This is a tautology as the meaning of a spinster is unmarried women; hence it's referred to as analytical propositional. To understand whether language, such as the use of verification principle provide any challenge to theist, when using words, metaphors etc to understand the existence of God is problematical to philosophical learning. Although it could be said, to some extent the use of language does shake the fundamental understanding of theist God. ...read more.

To add, statements are meaningless if there is nothing that would count for or against them being true. On this basis, much of what passes for religious language would be meaningless; because none of these things can be specified in terms of concrete facts that can be checked by observation. To argue against A.J Ayer, it is critiqued that a person can never have absolute proof that there is an external thing being observed; as people could be mistaken. In other words, to base certainty on evidence, one should be aware that evidence is never certain. Also, A.J Ayer is a logical positivist, who had concentrated on a simple "picturing" view of language, but it was soon realised that language can be meaningful in terms of many other functions, such as expressing feelings, giving commands or stating preferences. However the philosophical problems such as the existence of God would be solved if the language people used corresponded to the phenomenal world, both in terms of logic and the evidence for what was being said. ...read more.

John Hick maintains that the verification principle is not a challenge to religious people when talking about God. He concluded that god talk is eschatologically verifiable. He also suggested that the verification principle meets the conditions of religion, as its truth is verifiable in principle. He also illustrated that truth of God's existence is verifiable at the end of things, by demonstrating the story of the Celestial City. Another view in support of religious people when talking about God is of Swinburne in his book, called God talk is evidently not nonsense. He argued that statements can be meaningful but unverifiable. He illustrated his point by giving the examples of toys in a cupboard. The toys only come out at night when no one observes them. The situation is meaningful even though it is fictitious and unverifiable. To conclude, much doubt have been raised to religious beliefs when talking about God, but however the verification principle has not managed to challenge these beliefs, for example Hare's lunatics. This illustrates that no matter what people say about God, these religious people have already made their mind up and no one can convince them or challenge them to change their view. ...read more.