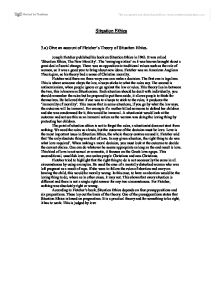 Give an account of Fletcher's Theory of Situation Ethics.

Situation Ethics 3.a) Give an account of Fletcher's Theory of Situation Ethics. Joseph Fletcher published his book on Situation Ethics in 1963. It was called 'Situation Ethics, The New Morality'. The 'swinging sixties' as it was known brought about a great deal of social change. There was an opposition to traditional values such as the role of women, so it was a good year to bring about new ideas. Fletcher was an American Anglican Theologian, so his theory had a sense of Christian morality. Fletcher said there are three ways one can make a decision. The first one is legalism. This is where someone obeys the law, always sticks to what the rules say. ...read more.

For example if a mother killed someone to defend her children and she was condemned for it, this would be immoral. A situationist would look at the outcome and not see this as an immoral action as the woman was doing the loving thing by protecting her children. The point of situation ethics is not to forget the rules, a situationist does not start from nothing. We need the rules as a basis, but the outcome of the decision must be love. Love is the most important issue in Situation Ethics, the whole theory centres around it. Fletcher said that 'the only absolute thing was that of love. ...read more.

He used the case of a mentally disturbed woman who was left pregnant as a result of rape. If she were to follow the rules of abortion and carry on bearing the child, this would be morally wrong. In this case, to have an abortion would be the loving thing to do, where as in other cases, it may not. This shows that every situation is different and there is not a single right answer for any two circumstances. For Fletcher, nothing was absolutely right or wrong. According to Fletcher's book, Situation Ethics depends on four presuppositions and six propositions. These lay out the basis of the theory. One of the presuppositions states that Situation Ethics is based on pragmatism. It is a practical theory and for something to be right, it has to work. This is judged by love ...read more.

Well structured and focused essay; Fletchers main theories on situation ethics are discussed well. The first paragraph which gives an account on the background of Fletcher is good as it clearly shows understanding of how he brought about his ideas. ...

Well structured and focused essay; Fletchers main theories on situation ethics are discussed well. The first paragraph which gives an account on the background of Fletcher is good as it clearly shows understanding of how he brought about his ideas. For example when student mentions 'love', we know that he is referring to it in a Christian view as s/he has mentioned that "he had a sense of Christian morality". Good use of examples throughout the essay; aids the clarity of the point being made. More key words could be added such as autonomy- ability to make a choice.

Each paragraph is concise and relates to the question well however as this is an A level piece, a higher level of analysis would be required. The essay is too brief to be an exam question. The student could've gone into more detail about the four presuppositions and six propositions which would have shown more knowlege of Fletchers theory of situation ethics.

Quality of writing is excellent- relevant key words such as moral/immoral, unconditional love,legalism and absolute. The essay doesn't seem to be finished though so student cannot be punished on poor grammar in the last paragraph. Overall, spelling and punctuation are good.