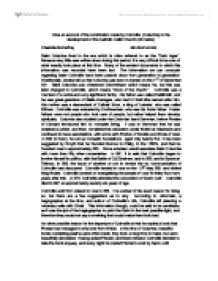 Give an account of the contribution made by Colmcille (Columba) to the development of the Catholic Celtic Church (35 marks) Charlotte McCaffrey Mrs McCormick Saint Columba lived in the era which is often referred to as the "Dark Ages". Because very little was written down during this period, it is very difficult to be sure of what exactly took place at this time. Many of the ancient documents in which this information was recorded have been lost. The information we can conclude regarding Saint Colmcille have been passed down from generation to generation. Traditionally, stories tell us that Columba was born in Gartan on the 7th of December 521. Saint Columba was christened Criomhthann which means fox, but this was later changed to Colmcille, which means "Dove of the church." Colmcille was a member of a noble and very significant family. His father was called Feidlimidh, and he was great-grandson of Nialle Hostages, who had U� Neil tribe named after him. His mother was a descendant of Cathair Moor, a king of Leinster, who was called Eithner. Colmcille was educated by Cruithnechan, who was his foster father. ...read more.

An other possible reason for the departure of Colmcille is that he copied a book that Finnian had managed to ship over from Wales. In the time of Columba, beautiful books containing psalms were often made, they took a long time to make, but were beautifully decorated. Having asked Finnain, and been refused, Colmcille decided to take the book anyway, and every night he copied Finnian's work by hand, until eventually he was finished. When Finnian found this out he was furious, and demanded that he get it back. When Colmcille refused, the issue was taken up with King Diarmuit of Tara, who said "To every cow belongs her calf, to every book its copy". This is one of the possible reasons that led to the Battle of C�l Dreimne, which was said to be Colmcille's first move into politics. Colmcille was victorious in this battle, but during the battle, 3000 people died. This resulted in Colmcille being expelled from Ireland, to try and convert as many souls as he had killed. ...read more.

The Dal Riata, who had settled in this area, had been militarily and politically challenged by the Picts. Both the Picts and Dal Riata claimed to own Iona, and because of this, the Picts had tried to isolate the Dal Riata. It is possible that Colmcille may have seen this as an extra added responsibility, and another challenge. Finlay suggested that Colmcille spent two years in the mainland, converting the tribes as he went along, before finally taking up the occupancy of Iona. We can see the clear political sensitivity and foresight of Columba, as the foundation of Iona lay in a very politically sensitive area. Many historians would be in disagreement over the nature and extent to Colmcille's career. It is certain that his mission was a most challenging and difficult one, with Columba experiencing language barriers, and although Colmcille brought with him to Iona, the identity of an U� Neill, undoubtedly, he would not have the same political power he would have had in Ireland. In the 34 years that Colmcille spent at Iona, it is difficult to figure out exactly what happened, as there are no surviving documents, and therefore the details are very scarce. ...read more.