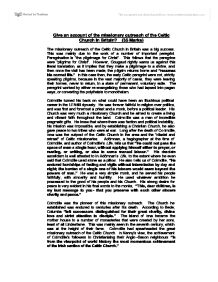 Give an account of the missionary outreach of the Celtic Church in Britain? (35 Marks)

Give an account of the missionary outreach of the Celtic Church in Britain? (35 Marks) The missionary outreach of the Celtic Church in Britain was a big success. This was mainly due to the work of a number of important peregrini. Peregrination is "the pilgrimage for Christ". This follows that the peregrine were "pilgrims for Christ". However, Gougaud rightly warns us against this literal translation, as it implies that they make a pilgrimage to a shrine, and then once the visit has been made, the pilgrim returns home and "resumes his normal life." In this case then, the early Celtic peregrini were not, strictly speaking pilgrims, because in the vast majority of cases, they were leaving their homes, never to return, in a state of permanent, voluntary exile. The peregrini worked by either re-evangelising those who had lapsed into pagan ways, or converting the polytheists to monotheism. Colmcille turned his back on what could have been an illustrious political career in the U� N�ill dynasty. He was forever faithful to religion over politics, and was first and foremost a priest and a monk, before a political leader. His Church was very much a missionary Church and he aimed to create a living and vibrant faith throughout the land. ...read more.

Unlike Colmcille, whose main evangelising took placer in Pictish territory, the monks of Iona moved south to focus on evangelising the Saxon territory. In terms of Aidan's life and achievements, he can be very much composed to Colmcille. According to Finlay, Aidan "marks the period of the great expansion of the Columban Church" Oswald, the son of a Bernicia king was banished with his brothers after his father was slayed. Here he became Christian, and is said to have spent time in Iona. After praying for a victory, Oswald regained his father's throne. He immediately sent for a monk who would be willing to preach the Word of God in his kingdom. Corman was initially chosen, but failed. A monk spoke up, saying that too much had been expected of the pagan Angles, and that St Paul's maxim regarding "milk for the babes" needed to be applied, in that before any real change could take place, they would have to be weaned and nurtured. This monk was Aidan, and after boldly speaking out, he was immediately chosen to replace Corman. Bede was filled with admiration for Aidan, and called him "a man of singular meekness, piety and moderations." ...read more.

Blaan was born in 565, near Kingarth, where his uncle St Catan, had founded a monastery. Although there is some uncertainty regarding whether he was a Pict or a Briton, he trained as a monk at Bangor, under the abbot Comgall. There are numerous church dedications to him in Strathclyde, Dunblane, and in the Pictish Highlands. James Hutchinson Cockburn sees these as evidence of a "correspondingly wide and effective ministry," and they are very evident to the regard in which Blaan was held. Fursa came from Ireland, and ministered to the East Anglicans. He converted many by example and teaching. Bede tells us that in his desire to be a hermit, he left his brother Foill�n in charge of his foundation. According to John Richard Green, Irish Christianity "flung itself with a fiery zeal into battle with the mass heathenism which was rolling in upon the Christian world." And John Ryan acknowledges that although the conversion of Scotland was down to the Irish and the Britons, the contribution of the Irish monks "far outdistanced" that of the Britons. It is very evident from looking at the works of Colmcille, Aidan and many more peregrine that the contribution that Irish monks made to the missionary outreach in Britain was vital. Charlotte McCaffrey L6 Mrs McCormick ...read more.