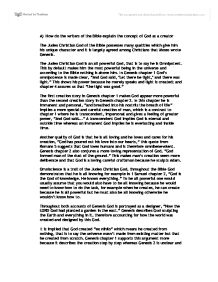 The Judeo Christian God of the Bible possesses many qualities which give him his unique character and it is largely agreed among Christians that Moses wrote Genesis.

The Judeo Christian God is an all powerful God, that is to say he is Omnipotent. This by default makes him the most powerful being in the universe and according to the Bible nothing is above him. In Genesis chapter 1 God’s omnipotence is made clear, “And God said, "Let there be light," and there was light.” This shows his power because he merely speaks and light is created; and chapter 4 assures us that “the light was good.”

The first creation story in Genesis chapter 1 makes God appear more powerful than the second creation story in Genesis chapter 2. In this chapter he is immanent and personal, “and breathed into his nostrils the breath of life” implies a more special and careful creation of man, which is a contrast to chapter 1 where he is transcendent, impersonal and gives a feeling of greater power, “And God said….” A transcendent God implies God is eternal and outside time whereas an immanent God implies he is everlasting and inside time.

Another quality of God is that he is all loving and he loves and cares for his creation, “God has poured out his love into our hearts,” this quote from Romans 5 suggests that God loves humans and is therefore omnibenevolent. Genesis chapter 2 also conjures a more loving representation of God, “God formed man of the dust of the ground.” This makes man’s creation seem more deliberate and that God is a loving careful craftsman because he sculpts Adam.

Omniscience is a trait of the Judeo Christian God, throughout the Bible God demonstrates that he is all knowing for example in 1 Samuel chapter 2, “God is the God of knowledge. He knows everything.” To be all powerful one would usually assume that you would also have to be all knowing because he would need to know how to do the task, for example when he creates, he can create because he is all powerful but he must also be all knowing otherwise he wouldn’t know how to.

Throughout both accounts of Genesis God is portrayed as a designer, “Now the LORD God had planted a garden in the east.” Genesis describes God sculpting the Earth and everything in it, therefore accounting for how the world was created and designed by this God.

It is implied that God created “ex nihilo” which means he created from nothing, that is to say the universe wasn’t made from existing matter but that he created from scratch. Genesis chapter 1 supports this argument more because it describes the creation step by step whereas Genesis 2 is unclear and seems to concentrate more on what is in the Earth for example Adam and Eve and the animals. It is never mentioned in the Bible whether God did in fact create ex nihilo, although it is suggested by both Genesis chapter 1 by not saying that God was creating from existing materials and also in Hebrews 11, “By faith we understand that the worlds were framed by the word of God, so that the things which are seen were not made of things which are visible.” Some theologians take this to mean that God created the universe from nothing and was not assembled from materials already in existence. According to Mormonism, a sect of Christianity, creatio ex nihilo is not found in the Bible and is therefore untrue: God created the universe out of matter that pre-existed, and ex nihilo creation is an invention of the post-Apostolic church.

Another quality of the Judeo Christian God is that he is a provider, “every tree of the garden thou mayest freely eat.” He provides fully for Adam and Eve’s needs before the fall, they do not have to work for their food it is simply made available to them, however after the fall the have to work the land. God also appears to provide for humans spiritually and ensures their place in heaven by sending Jesus. This Provider God is loving and caring so fits generally to the idea that he is Omnibenevolent.