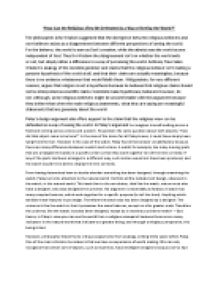 How Can the Religious View Be Defended As a Way of Seeing the World?

﻿?How Can the Religious View Be Defended As a Way of Seeing the World?? The philosopher John Wisdom suggested that the divergence between religious believers and non-believers exists as a disagreement between different perspectives of seeing the world. For the believer, the world is seen as God?s creation, while the atheist sees the world as one independent of God. Thus for Wisdom the disagreement isn?t on whether the world exits or not, but simply rather a difference in a way of perceiving the world. Anthony Flew takes Wisdom?s analogy of the invisible gardener and claims that the religious believer isn?t making a genuine hypothesis of the world at all, and that their claims are actually meaningless, because there is no evidence whatsoever that would falsify them. Wittgenstein, for very different reasons, argues that religion is not a hypothesis because he believes that religious claims should not be interpreted as scientific claims. Scientists make hypotheses; believers however, do not. Although, some religious believers might be uncomfortable with this argument because they believe that when the make religious statements, what they are saying are meaningful statements that are genuinely about the world Paley?s design argument also offers support to the claim that the religious view can be defended as a way of seeing the world. ...read more.

Each time the gardener isn?t found, the believer simply modifies their belief so that it isn?t falsifiable. Flew is essentially arguing that a statement such as ?there is a gardener? can only be meaningful if it is a genuine claim about the world. However, it can only be a genuine claim, if the person producing the statement can consider it being wrong, or to put it simply, falsified. Someone who refuses to renounce their faith, no matter what is discovered about the world, is not talking about the world at all. When shown evidence that their statement isn?t true, they add to or and qualify it so that the new evidence no longer rebuts it. An example would be how Christians used to believe in the creation as being literally 6 days, but now most accommodate scientific advances into their faith as well, almost taking a deistic approach to it. This is due to modern cosmology and evolutionary theory causing doubts on original claims. Therefore, in Flew?s view the religious view cannot be defended as a way of seeing the world because the religious believer essentially ?dies the death of a thousand qualifications?. No matter what proof against the religious view is given to them, the religious believer simply just qualifies the evidence. ...read more.