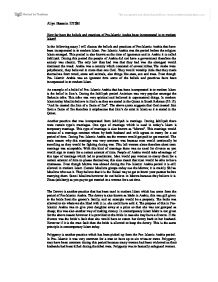 How far have the beliefs and practices of Pre-Islamic Arabia been incorporated in to modern Islam?

How far have the beliefs and practices of Pre-Islamic Arabia been incorporated in to modern Islam? In the following essay I will discuss the beliefs and practices of Pre-Islamic Arabia that have been incorporated in to modern Islam. Pre- Islamic Arabia was the period before the religion Islam emerged. This period is also known as the time of ignorance and in Arabic it is called Jahiliyah. During this period the people of Arabia did not have a government therefore the society was chaotic. The only law they had was that they had was the strongest would dominant the weak. Arabia was a country which consisted of several tribes. The Arabs were polytheistic, they believed in more than one God. They would worship idols that they made themselves from wood, stone and animals, also things like stars, sun and trees. Even though Pre- Islamic Arabia was an ignorant time some of the beliefs and practices have been incorporated in to modern Islam. ...read more.

Even though Mutwa was abused during the Pre- Islamic Arabia period it is still allowed in modern Islam. Certain Muslims groups today use the Mutwa; it is mainly Shi'aa Muslims who use it. They believe that it is the Halaal way to get to know your partner before marrying them. Sunni Muslims however do not believe in Mutwa because they believe it is Zinaa (adultery) as you pay to get married to a woman for a set time. The Dowry is another practice that has been used in modern Islam which has come from the period of Pre-Islamic Arabia. The dowry is also known as Mahr in Arabic, this was gift given to the bride from the groom's family, and an example would be a property. The bride was allowed to do whatever she liked with it i.e. she could have sold it. The purpose of this in Pre-Islamic Arabia was to give your daughter away at a price so that she was not grouped as cheap; this was also another way of making money. ...read more.

The Arabs had placed three hundred and sixty Gods in the Kabah. The Kabah is cubed shaped buildings placed in the middle of Mecca were Muslims believe it is God's house. They would worship these idols by going around the Kabah. In today's Islam the Kabah does not consists of any idols, all the idols have been destroyed. All that remains is an empty Kabah which Muslims refer to as the house of God. However Muslims in the present day do go round the Kabah during Pilgrimage, this is also known as Tawaf. Muslims believe that it shows their devotion and love to God. In conclusion I conclude that during Jahiliyah people were ignorant however they had no knowledge about the norms due to lack of education. Even though that this period was very ignorant many of the beliefs and practices have been used in contemporary Islam, this therefore suggest that this period was extremely important for the religion Islam to emerge. There have been many changes from this period, for instance infanticide is known forbidden in Islam. ?? ?? ?? ?? Aliya Hussain 12TSH ...read more.