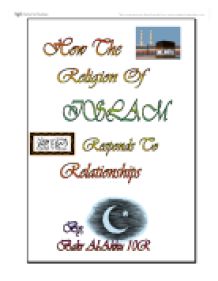 How Islam responds to Relationships

Contents Pages 1. Introduction 3 2. Islamic marriage ceremonies 4 3. roles of men & women within an Islamic family 6 4. Muslim Beliefs about the Ethics of Divorce 7 5. Muslim beliefs about s****l relationships 8 6. Muslim beliefs about contraception 10 7. conclusion 11 8. Bibliography 12 Introduction Throughout this project, the intention of the information is to answer the question: How does the religion of Islam respond to issues on relationships? All through this Booklet, I have kept in mind to focus on the ideas of Islamic relationships and what this means to a Muslim, in the Islamic definition. In Islam a definition of relationships means marriage, contract, s*x, families, children etc. Therefore, if applied to Islam in liaison to the now modern everyday life this would involve issues such as * Men & Women's Roles in the family * Beliefs about the ethics of Divorce * Beliefs about s****l Relationships * Religious attitude to the use of contraception These are the subjects I will be talking about and looking over at the Islamic perspective on these topics of concern. To portray the view Islam has over these issues I will be using: * The genuine teachings from the word of our God `Allah` himself, doing this through the Qur'an. * Referring to important hadiths (lessons) and quotes from the prophet Mohammed (pbuh) * The message given out today by the most knowledgeable top scholars. These should give a clear message of what, the view on these issues used to be like, how they have progressed and possibly altered over the years, the differences on these matters from today in contrast to when the religion began, and how it is today, right now in Muslim houses and nations across the world. Islamic Marriage Ceremonies Marriage (nikah) is a solemn and sacred social contract between bride and groom. This contract is a strong covenant; `Mithaqun Ghalithun` as expressed in Qur'an 4:21. ...read more.

Women are owed more respect in Islam than men and the pathway to heaven is at your mother's feet. Muslim Beliefs about the Ethics of Divorce Muslim marriage is supported by Islam and is classified as a very good act between a man and women however Muslims are not so ignorant to think that marriages don't fail. They do, it is acknowledged that they do, and since marriage is a legal contract between two people and if the continuation of a marriage brings misery to the couple and their children, it can be undone. In a hadith it states; `If a wife fears cruelty or desertion on her husbands part, there is no blame on the, if they arrange an amicable settlement between themselves; and such settlement is best; even though men's souls are swayed by greed` Also it is said that of all things allowed in Islam but disliked (this is known as `makrooh` e.g. smoking) Divorce is the most hated of them all. A man cannot seek to have a divorce from his wife until it is certain that she is not pregnant, as they may change their mind and try and give it another go if the woman is pregnant. Also as divorce is much hated and is not to be done lightly at all, once divorce has been announced there is a period of three months called `iddah` this is a period of three months to allow for a possible reconciliation of the marriage. If there is no reconciliation then the divorce is permitted to take place. A woman is also allowed to have a divorce, either by an agreement with her husband or because of his treatment of her. Children are regarded as illegitimate if their parents are not married and, according to Shari'ah law, the father has no legal responsibility. These are the complete conditions of marriage in the contract and the circumstances in which it is permitted, backed up by quotes from the Qur'an. ...read more.

I accept that marriage breakages can happen and that they cannot be forbidden as the continuous misery of two people is worse than the split of their marriage so it should be permitted. However I do think that in today's modern society people are getting married with the thought that they can just divorce if it goes wrong but I believe this is truly wrong! People should seriously contemplate whether or not the time is right for them to get married before they just go into it. Also despite being Muslim myself I feel that the permittance of a man having more than one wife is wrong and unfair on the women themselves, because no matter how fair the man wants to be, he'll never be able to treat all them with the same fairness. Also I don't feel that a man is able to truly love more than one woman at the same time, so having more than one fair would make one think that the man doesn't actually love any of his wives but keeps them for pleasurably reasons only. I also have to disagree with a certain Shari'ah law stating that `Children are regarded as illegitimate if their parents are not married and, according to Shari'ah law, the father has no legal responsibility` I believe this to be unjust as women cannot become pregnant by herself; the man in full knowledge of what he was doing had s*x with her, giving him responsibility for any offspring created from it. Also men may very well use this law as a means of taking advantage of women as they will not be held responsible for any children created as a result of it. Apart from those, Islam has a very modern and fair way of looking at relationships, and apart from those mentioned I don't believe that women are treated unfairly in anyway at all. ...read more.