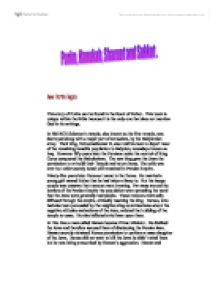 How Purim Began This story of Purim can be found in the Book of Esther. This book is unique within the Bible because it is the only one that does not mention God in its writings. In 586 BCE Solomon's temple, also known as the first temple, was destroyed along with a major part of Jerusalem, by the Babylonian army. Their king, Nebuchadnezzar II, also told his men to deport most of the remaining Israelite population to Babylon, nowadays known as Iraq. However fifty years later the Persians under the control of King Cyrus conquered the Babylonians. The new king gave the Jews the permission to re-build their Temple and return home. The exile was over but unfortunately Israel still remained in Persian Empire. Ninety-five years later Xersces I came to the throne. He married a young girl named Esther that he had taken a fancy to. But the happy couple was unaware that rumours were brewing. Far away around the borders of the Persian Empire the population were spreading the word that the Jews were generally bad people. These rumours eventually diffused through the empire, critically reaching the king. Xerces, who had also been persuaded by the neighbouring countries/states about the negative attitudes and actions of the Jews, ordered the building of the temple to cease. He also inflicted strict laws upon them. ...read more.

Seleucus' successors found it extremely difficult to rule so they decided to solve the problem by encouraging the population to Hellenize. This simply means to adapt to the Greek way of life. This decision was taken well by many people. They dressed like Greeks, they spoke Greek, and they even worshipped Greek gods. This is why the New Testament was written in Greek so that everyone could understand it. The main problem lay in the religion of Judaism. The majority of Jews adapted and was happy with the Greek way of life. But some Jews strongly believed in their traditional ways and hence Judaism was divided. In 175BC Antiochus came to the throne. He did not want his New Kingdom to have any problems so he decided to force the rebellious Jews into Hellanization. His beliefs were so strong that he passed a law forbidding Jewish customs and festivals such as circumcision and celebrating the Sabbath. Jews were ordered to sacrifice to an Idol placed in the Temple (Solomon's). They had no choice. Their faith was being torn away, by the threat of torture and death. As in most tales there are heroes and in this retelling they are the strong Jews who kept their faith no matter what. Mettathias was one of these heroes. He killed a Greek officer and then fled to the hills with his two sons. ...read more.

So they built a shelter out of the basic materials that they had available to them. These shelters were called Sukkah. Nowadays when the festival of Sukkot arises Modern Jews build a Sukkah in their gardens or at their Synagogue. Sukkahs are temporary structures made from wood and palms. They are decorated with plants and fruit. The Jewish family prays in it and eats meals in it over the eight days. This is also known as the Feast of the Tabernacles. This hut must be so temporary so that you can see the stars and moon through the roof. This reminds them of people poorer than themselves. Because of this all the Harvest food is donated to charities. Lulav and Etrog Four species should be waved is the mitzvah regarding this custom. The four species are: * A palm branch * A myrtle branch * A willow branch These three tied together are known as the Lulav. The Etrog is: * A citrus fruit The Lulav and Etrog are the symbols of Harvest and therefore are carried at the Harvest festival, Sukkot. They are waved in every direction to show that God's love is everywhere. People believe that the Etrog represents the heart because of its shape, the palm represents the spine-strong and strait and the willow represents the mouth because it makes a nice noise. The Myrtle is meant to represent the eye (?). Rain is very important to because the Lulav and Etrog need it to survive just like the Jews. ...read more.