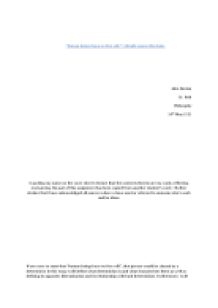 Human beings have no free will, critically assess this claim.

﻿?Human beings have no free will.? Critically assess this claim. John Norton Dr. Reid Philosophy 24th May 2012 In putting my name on the cover sheet I declare that the contents therein are my work, reflecting my learning. No part of this assignment has been copied from another student?s work. I further declare that I have acknowledged all sources where o have used or referred to someone else?s work and/or ideas. If one were to state that ?human beings have no free will?, that person would be classed as a determinist. In this essay I will define what determinism is and what characterises them as well as defining its opposite, libertarianism and its relationship with hard determinism. Furthermore, I will detail the two variations of compatibilism and where they stand in relation to determinism and libertarianism. The dictionary defines determinism as ?the doctrine that the will is not free, but is determined by antecedent causes, whether in the form of internal motives or external necessity, the latter being the posulate of fatalism.?[1] This means that determinism is the idea that everything in the entire universe, past, present or future has been predetermined by a higher power. ...read more.

Due to the progression of science, we have been given the ability to describe and understand a number of these laws. However, there are some phenomenon of our world that still remains a mystery to us, for example; how human beings commit things to memory, it has puzzled scientists and psychologists alike for years. One of the many arguments against determinism is this; ?if determinism is true, is it morally correct to prosecute someone via the criminal justice system?. This argument has fairly solid ground to stand on. If one were to commit a murder, but that person was already predestined to commit said murder, is he or she really accountable for their actions which they had no choice but to commit, or is the being who initiated that action accountable? At the opposite end of the spectrum, we have free will. Free will is defined as ?the ability of agents to make choices free from certain kinds of restraints?[3]. ...read more.

A person's will is to be identified with their effective first-order desire, i.e., the one that they act on. For example, there are "wanting addicts", "unwilling addicts" and "willing addicts." All three groups may have the conflicting first-order desires to want to take the drug to which they are addicted and to not want to take it. In conclusion, there are many different arguments for and against determinism and free will, all of which have equally strong points. Reiterating what has previously been said throughout this essay, determinism is the idea that human beings experience no free will what-so-ever and that everything that they have done and will do has been predetermined by a higher power. On the other hand there is free will, this is when people believe that they do as they wish because it is what they want. John Norton ________________ [1] The Concise English Dictionary, 1982 [2] http://dictionary.die.net/law%20of%20universal%20causation [3] http://en.wikipedia.org/wiki/Free_will [4] Thomas Hobbes ...read more.