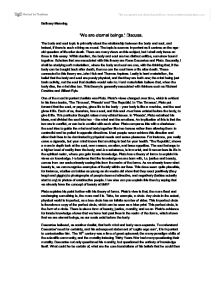 'We are eternal beings.' Discuss. The body and soul topic is primarily about the relationship between the body and soul, and indeed, if there is such a thing as a soul. The topic is seen as important as it centres on the age-old question of life after death. There are many views on this subject, but I shall only focus on three in this essay. Within dualism, the body and soul are two distinct entities, somehow bound together. Scholars that are associated with this theory are Rene Descartes and Plato. Secondly, I shall be studying soft materialism, where the body and soul are one, with the thinking that, if the body can be bought back after death, then so can the soul have a life after death. Those connected to this theory are John Hick and Thomas Aquinas. Lastly is hard materialism, the belief that the body and soul are purely physical, and that they are both one; the mind being just brain activity, not the soul that dualists would refer to. Hard materialists believe that, when the body dies, the mind dies too. This theory is generally associated with thinkers such as Richard Dawkins and Gilbert Ryle. One of the most important dualists was Plato. ...read more.

Descartes realises therefore that presently our bodies are intermingled and that possibly in the future they are separable. Descartes' intermingling thesis argues that the mind and body are completely different - the body is divisible therefore is not necessary. Conversely, the mind is non-divisible and is therefore necessary. Descartes is a famous advocate of substance dualism - the idea that the mind and body are separate substances, with potentially the mind being able to survive the bodily 'death', and therefore live eternally. Soft materialism, however, has thinkers such as Aquinas. Thomas Aquinas' beliefs are based upon those of the Christian church, specifically those of the resurrection of Jesus, as the belief of the resurrection of the body is based upon this. As Jesus rose from the dead, it shows that this will happen to us, too. The Bible shows how our bodies are 'sown perishable' and then 'raised imperishable', and that we have a 'natural body' but are raised in a 'spiritual body', which means that, although our bodies decay, our soul lives on. The fact that Jesus rose from the dead with a body, and that Aquinas believes that that will happen to us, makes Aquinas a soft materialist rather than a dualist as his many of his other beliefs seem to be. ...read more.

Proposing that we humans consist of a body and a soul is to make the same category mistake, and that that which we call a 'soul' or 'mind' isn't a separate thing at all, as it isn't a thing at all. It results from an organisation of things; the body. As the soul doesn't exist, and our physical bodies die, we are not eternal beings. Another hard materialist is Richard Dawkins, an evolutionist thinker and atheist. He believes that there is no soul, and the only way that human's can 'achieve' immortality is through the passing on of their genetic code. He believes that souls are only 'myths' that are supported by no evidence whatsoever, and that evolution is the only rational theory, which is supported by evidence. Any sense of individuality is created by the digital and biological information in the brain, not a mind or soul. Upon death, we only leave behind our genes and 'memes', culture created through our catchphrases, teachings and quotes. And as such, we are definitely not eternal beings. In conclusion, I believe that there is a possibility of an afterlife, as Hick's argument for the plausibility of Heaven, or an afterlife, is conceivable. Soft materialism bridges the gap between dualism and hard materialism, and, I believe, the closest to the answer. ?? ?? ?? ?? Bethany Manning ...read more.