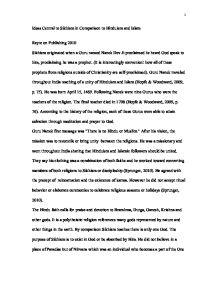 Ideas Central to Sikhism in Comparison to Hinduism and Islam

Ideas Central to Sikhism in Comparison to Hinduism and Islam Reyte on Publishing 2010 Sikhism originated when a Guru named Nanek Dev Ji proclaimed he heard God speak to him, proclaiming he was a prophet. (It is interestingly convenient how all of these prophets from religions outside of Christianity are self-proclaimed). Guru Nanek traveled throughout India teaching of a unity of Hinduism and Islam (Hopfe & Woodward, 2009, p. 75). He was born April 15, 1469. Following Nanek were nine Gurus who were the teachers of the religion. The final teacher died in 1708 (Hopfe & Woodward, 2009, p. 76). According to the history of the religion, each of these Gurus were able to attain salvation through meditation and prayer to God. Guru Nanek first message was "There is no Hindu or Muslim." After his vision, the mission was to reconcile or bring unity between the religions. He was a missionary and went throughout India sharing that Hinduism and Islamic followers should be united. They say his clothing was a combination of both faiths and he worked toward converting members of both religions to Sikhism or discipleship (Sprunger, 2010). ...read more.

They frequently shave their heads and beards and are often active as missionaries. The second sect is the Sahajdharis who reject militarism and prefer to be clean shaven (Sprunger, 2010). These were pacifists in their worship of the religion. The third sect is the Singhs which came about following the fifth Guru Arjan Des (Sprunger, 2010). He decided that the religion needed a militarists sect. The Sikhs had suffered persecution from Islam and as a result the Sighs were established. Later Guru Gobin Singh added a ritualistic 'baptism by sword' that would teach Sikhs how to defend themselves in times of war. These grew their hair long, wore beards, and carried knives or daggers. The Singhs are known for their military skill and often served as police in India and some became soldiers of the British (Sprunger, 2010). Some say the religion came to existence due to the differences of Islam to Hinduism in India and the irreconcilable tenets of each faith. Hindus believe in worshipping idols and visible objects or entities. Sikhism is a belief that worship is exclusive to God and no other created entity. ...read more.

They esteem meditation and prayer over all other forms of worship. They believe worship is a part of everyday life and followers are not to cut their hair in honor to God. The pursuit of God is directed inside rather than outside for Sikhs. While Hindus and Muslim followers believe their religion superior, Sikhism has the primary focus on God rather than religiosity. The Guru Nanek Dev Ji taught that the main objective in Sikhism is to attain a relationship with God or become one with God, not follow the traditions and rules set forth in a religion. The only way to cleanse oneself is to love God and desire Him with the whole being. Another Guru, Granth Sahib Ji said that those that are God's bound servants are totally dedicated to seeing God (Guru Granth Sahib Ji, 465). Sikhs believed that the pursuit of God did not interfere with family life and the Gurus also married and had families. The Sikh faith consisted of praying, meditating the scripture, and living a simple life. A life free of ego, emotional trauma caused by greed, money, and other human emotions. They believed God would reward those that worshipped him above all material goods. ...read more.