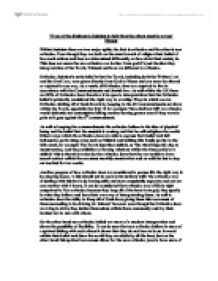 Within Judaism there are two major splits, the first is orthodox and the other is non orthodox. Even though they are both on the same branch of religion their belief of how such actions and laws are determined differently on how strict their society is. This does not mean the non orthodox are further from god it’s just the idea they interpretation of the Torah, Talmud and laws are different to orthodox.

Orthodox Judaism's main belief is that the Torah, including both the Written Law and the Oral Law, were given directly from God to Moses and can never be altered or rejected in any way. As a result, all Orthodox Jews are required to live in accordance with the Commandments and Jewish law. As well within the UK there are 80% of Orthodox Jews therefore it is open to interpretation that the Orthodox belief is primarily considered the right way to worship. Ways in which we can Orthodox abiding all of Gods laws is by keeping to the 613 commandments set down within the Torah, especially the first 10 for example ‘thou shall not kill’ an orthodox would defiantly not contemplate killing another leaving person even if they were in pain as it goes against the 6th commandment.

As well as keeping the commandments the orthodox believe in the idea of physical being and the belief that the messiah is coming and that he will enlighten the world. Others ways which the orthodox Jews are able to express their belief and full holiness by performing areas such as Niddah and holding this family purity to the full extent, for example The Torah describes niddah, as ‘the ritual impurity due to menstruation, and the prohibition of having relations within the time period of a niddah’ this is therefore taken by the orthodox Jews that the are unable to have sexual contact within the woomens monthly menstration and as well she has to stay un touched for two weeks.

Another purpose of how orthodox Jews are considered to pursue life the right way is by obeying Koser, ‘a kid should not be cook in its mothers milk’ the orthodox way of dealing with this law is by having milk and meat completelly separate and not eat one another with 4 hours. It can be considered that orthodox way of life is right compaired to Non orthodox because they keep all of the laws from god, they specify in what they believe and have their own way of interpretating them. As well to orthodox Jews the ablity to Keep all of Gods laws giving them this awareness of them succeeding to be striving for holness’ however even though the Orthodox Jews are tring to strive they isolate them selves within there community and try their hardest not to mix with others.

On the other hand non orthodox beliefs are more of a modern interperation and shows the possiblity of flexiblity.  It can be seen that non orthodox believe in more of a spirtual biding with each others it shows that they do not have to be so forward within their belief and show the world they can abide by all the laws, but on the other hand this spritual awareness allows for the non orthodox jews to have more of a say on what laws they believe in and how they feel the can abide with them and also blend in to society. The non orthadox jews are seen to take an non literal view of the laws for example koser, they don’t really feel it is totally applicable and they eat milk and meat together or they don’t seprate the work services. Unlike the Orthodox jews waiting for the messiah to come the Non orthodox jews believe in the idea that the messiah does not need to a person and they do not require the temple to be re built as they are happy as they are. The non orthodox aspect has an slight area of freewill where it is the Jews own choice to whaet they want to believe in and how they interpretate the laws, guidelines and community. If it was considered that the Non orthodox view was correct because of this idea for there religion to be free and be able to interpretate the laws in their own way and association with modern day then the strict order of Orthodox is wrong because it is strict and unaware of modern times.

Even though the orthodox and non orthodox are different sections of Judaism they still both use the synagogue to Worship god but even their ideas in the synangogue are different. For Orthodox Jews, women and men should be seprated and the women aspects are more focused at home and looking after the chicldren, while the men are at work or being Rabbi’s helping in the community, how ever in an Non orthodox synagogue men and women are able to sit together though worship as well women are able to become Rabbi’s as well as working and looking after the children. As well in the non orthodox faith they allow to bring there children up under the faith but also allow for them to make their own decision on the laws, however orthodox children are brought up very strict and abide by every law like their parents and ancestors.

To conclude both divisions within Judaism are part of the same religion, they are united in faith and faith to God. So no one group can be wrong as it is down to personal interpretation. As well both splits are right in there own society as it more about there society and community and its just like looking at different cultures instead of the idea one must be wrong as they are the same religion.