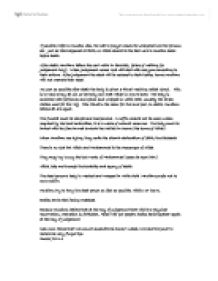 If possible, before a Muslim dies, the call to prayer should be whispered into the persons ear. Just as this happened at birth, so Allah should be the last word a Muslim hears before death.

If possible, before a Muslim dies, the call to prayer should be whispered into the persons ear. Just as this happened at birth, so Allah should be the last word a Muslim hears before death. After death Muslims believe the soul waits in barzakh, (place of waiting for Judgement Day). When judgement comes God will deal with everyone according to their actions. After judgement the dead will be restored to their bodies, hence Muslims will not cremate their dead. As soon as possible after death the body is given a ritual washing called Ghusl. This is to wash away all sin so the body can meet Allah in a pure state. The body is anointed with perfumes and spices and wrapped in white cloth, usually the Ihram clothes used for the Hajj. This ritual is the same for rich and poor, in death, Muslims believe all are equal. The funeral must be simple and inexpensive. A coffin should not be used, unless required by the local authorities, it is a waste of natural resources. The body must be buried with the face turned towards the Kab'ah in Mecca (the house of Allah). ...read more.

and His will" (Sedki Riad, 1). People who submit themselves to Allah are called "Muslims". Muslims believe that their lives on this earth are only a transition that precedes their afterlife. Muslims ancestors were ancient Arabs. "The ancient Arabs had no conception of either resurrection or the existence of another life after death" (Said Ennahid, 1). Even so, they seemed to believe that the dead continued on after death. It has been shown that they had ideas of wandering and thirst associated with dying. They believed that the dead who were left without burials and those whose death was not avenged were left with their spirits wandering and thirsty (Ennahid, 1). With the advent of Islam, they believed that life and death were divine decrees, given by god, not by events or parents (Ennahid, 1). They also believe that their God judges them after death and that the spirit continues on after death. Said said, "by embracing Islam, Arabs substituted the notion of community of faith to the previous notion of community of blood" (1). In an Islamic cemetery, funerary monuments are always common (Ennahid, 1). But, Riad claimed that only a stone with no writings may be used to mark a grave's location (4). ...read more.

When an Islamic funeral procession passes along a street, the people sitting along it are obligated to stand as it passes, as a sign of respect (Ennahid, 3). This is similar to the tradition in some Christian religions where passers-by walk along with the procession or say a prayer. People in both of these cultures show respect for other people's loved ones when they die. Said commented, "the burial must be done on the same day of death or the following day, but their are some exceptions." A nighttime hurried burial is not approved (Ennahid, 3). When it actually comes time to put the body in the grave, it is placed in the grace by the nearest relative. Muslims always make sure the body is buried facing Mecca (Ennahid, 3). Following their tendency, they place the body on its right side (Riad, 4). According to Islam the good people welcome death as a rite passage to a better existence in the hereafter. They look forward to death, as a happy event. The wish for death can be negative for the escapist who looks to death as a relief from present psychological or physical distress. ...read more.