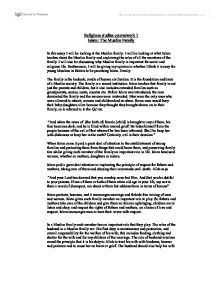 Religious studies coursework 1 Islam: The Muslim Family In this essay I will be looking at the Muslim family. I will be looking at what Islam teaches about the Muslim family and explaining the roles of all the members of the family. I will also be discussing why Muslim family is important for social and religious life. Furthermore, I will be giving my opinion in whether I think it is easy for young Muslims in Britain to be practising Islam. Family The family is the bedrock, cradle of human civilisation. It is the foundation and basis of a Muslim society. The family is a scared institution. Islam teaches that family is not just the parents and children, but it also includes extended families such as grandparents, uncles, aunts, cousins etc. Before Islam was introduced, the men dominated the family and the women were mistreated. Men were the only ones who were allowed to inherit; women and children had no share. Some men would bury their baby daughters alive because they thought they brought shame on to their family, as is referred to in the Qu'ran "And when the news of (the birth of) female (child) is brought to any of them, his face becomes dark, and he is filled within inward grief! He hides himself from the people because of the evil of that whereof he has been informed. Shall he keep her with dishonour or bury her in the earth? Certainly, evil is their decision." When Islam came it paid a great deal of attention to the establishment of strong families and protecting them from things that could harm them, and preserving family ties whilst giving each member of the family an important role in life. ...read more.

The Muslim society has many ceremonies; this includes the marriage ceremonies, which brings all family members together. The marriage ceremony is considered to be a social activity for the family. It is very important that Muslims get married. In some Muslim communities the parents generally arrange the marriage. During this ceremony, the Bride and groom arrive at the Mosque. The Imam takes consent of the couple, the Bride normally does not sit among the crowd, she is inside another room, so, her Father, Uncle or some other relative with a couple of witness go there and seek her permission and consent for marriage. The witnesses go and tell the Imam what the Brides consent is. The Imam recites verses from the Holy Qu'ran and Quotes the Sayings (Hadith) of Prophet Muhammad. The groom is asked if he accepts the bride as her wife, and he accepts loudly, and they are declared husband and wife. Dry Fruits and sweets are offered to participants of the occasion. The bride goes with the family of her husband to her in laws. The husbands have to invite family and friends at a Lunch Dinner or reception next day or within few days of marriage, this event is called Walima that is when they have a lavish dinner and listen to music. This is a social and religious life of the Muslim family because it is part of the Muslim religion to get married and it is social because friends and family gather together to celebrate. Another ceremony important to the Muslim family is the naming ceremony. This takes place when the baby is seven days old. ...read more.

Then everyone will encourage each other and no one will make fun of the way they are dressed because everybody will be dressed the same way. However, young Muslims in Britain today should put all the problems they face in Britain aside and just try the best that they could in following their religion and Allah would make it easier for them. Furthermore, some people will disagree with my opinion and say that young Muslims in Britain today do not have many problems in following their religion. Their reason for this is that young Muslims do not have to eat foods that are not halal. There is always a choice of foods that do not contain meat and gelatine for them to eat. They can eat vegetarian foods at school and when they get home they can eat halal foods. This is a solution they can use to carry on following their religion. Young Muslims can also sort out the issue about the swimming and P.E by their parents discussing this matter with the school and they can be allowed to wear long waterproof vest and long trousers for swimming. They can also wear long clothes for P.E. They also do not have to listen to 'hip-hop' music as Muslim people nowadays are producing their own 'hip-hop' music but talking about Allah and Islam. In conclusion, I have looked at the whole aspect of a Muslim family and I have also given my opinion about whether I think that it is hard for young Muslims in Britain today in following their religion. I have also learned that Family is very important to Muslims and they support each other in worshipping Allah. Without Family love, most people would not become what they have become today. ...read more.