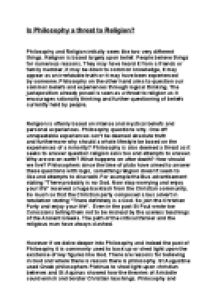 Is Philosophy a threat to Religion?

﻿Is Philosophy a threat to Religion? Philosophy and Religion initially seem like two very different things. Religion is based largely upon belief. People believe things for numerous reasons. They may have heard it from a friends or family member, it may be down to common knowledge, it may appear as an irrefutable truth or it may have been experienced by someone. Philosophy on the other hand aims to question our common beliefs and experiences through logical thinking. The juxtaposition already posed is seen as a threat to religion as it encourages rationally thinking and further questioning of beliefs currently held by people. ...read more.

What happens on after death? How should we live? Philosophers since the time of plato have aimed to answer these questions with logic, something religion doesn't seem to like and attempts to discredit. For example the Bus advertisement stating "There probably is no God. Now stop worrying and enjoy your life" received a huge backlash from the Christian community. So much so that the Christian party composed a bus advert in retaliation stating "There definitely is a God. So join the Christian Party and enjoy your life". Even in the past St Paul wrote toe Colossians telling them not to be mislead by the useless teachings of the Ancient Greeks. ...read more.

Philosophy and Religion have been in a relationship with one and other since the conception of both. There are also philosophical arguments used to back up religion such as the ontological argument, the cosmological argument and the argument for design. As Francis Bacon said "a little philosophy makes men atheist; but a great deal reconciles them to religion". Philosophy and Religion in a way feed off each other to prove each other. Personally i think that philosophy is not killing religion. It can be used as an effective tool to prove it and a better understanding of philosophy, research and religion can only lead to a logical understanding of faith. ...read more.