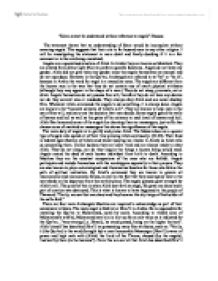 &quot;Islam cannot be understood without reference to angels&quot; Discuss The statement shows that an understanding of Islam would be incomplete without covering angels

"Islam cannot be understood without reference to angels" Discuss The statement shows that an understanding of Islam would be incomplete without covering angels. This suggests that their role is far beyond seen in any other religion. I will be investigating the statement in more detail and finally deciding if it is a fair comment or is the role being overstated. Angels are a specialised creation of Allah. In Arabic they are known as Malaikah. They are created from divine light (Nur) to perform specific functions. Angels do not have any gender. Allah did not give them any gender since the angels themselves are asexual and do not reproduce. However in the Qur'an, Archangels are referred to as "he" or "he is", because in Arabic the word for angel is a masculine noun. The angels are different from the human race in the way that they do not contain any of man's physical attributes (although they may appear in the shape of a man.) They do not sleep, procreate, eat or drink. Angels themselves do not possess free will, therefore they do not have any desires nor do they commit sins or misdeeds. They always obey Allah and can never disobey Him. ...read more.

This shows the importance of faith as the mosque is more than just a place of worship. It is also seen as a community centre where problems are solved. In some contexts, it is sometimes shown that Mika'il is partnered with Jibra'il; this is not true if referred to the Qur'an. He is only mentioned once in the Qur'an and is also charged with providing nourishment for bodies. Knowledge for souls and learning are a very important part of a Muslims life. It is a duty a Muslim must follow. Israfil is the fourth angel. He is responsible for signalling the coming of judgement day by blowing the horn as well as delivering commands. The first trump will cause the death of every living creature in the heavens and the earth as well as the destruction of all created things. The second trump is known as the calling forth. With one of his four wings he fills the west, with the second he fills the east, the third he descends from heaven to earth and the fourth he keeps himself velled. If Allah wants something to happen in creation, He causes the pen to write upon the tablet, which is between Israfils eyes, and then Israfil relays the command to Mika'il. ...read more.

saw him, they did extol him and (in their amazement) cut their hands: they said: "Allah preserve us! No mortal is this! This is none other than a noble angel!" The Islamic concepts of creation, revelation, prophecy, and the events that are occurring in this world, worship, the spiritual life, death, resurrection, and the central position of man in the cosmos cannot be understood without reference to the angels. Denial of the existence of angels is considered disbelief for Muslims, because a person would be rejecting verses of the Qur'an, as well as sayings of the prophet Muhammad. This can be portrayed in the Qur'an, "O you who believe! Believe in Allah and His messenger, and the Book He sent down to his messenger, and the scriptures which He sent down before. Anyone who rejects Allah and His angels and His books and His messengers and the last day has gone very far astray." Muslims cannot see the angels because they are made of things which our eyes cannot see. However, Muslims know that they are there, because Allah has told the Muslims, so sometimes the presence of the angels can be felt. This feeling of the angel's presence helps the Muslims feel a spiritual aspect which they do not feel with Allah. Belief in angels is part of the five pillars of faith (iman in Islam). ...read more.