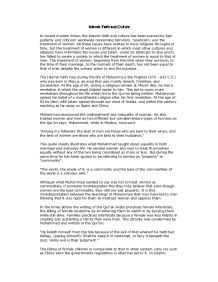 Islamic Faith and Culture - the problems Islam faces with the treatment of women.

Islamic Faith and Culture In recent modern times, the Islamic faith and culture has been scarred by bad publicity and criticism worldwide concerning terrorism, fanaticism, and the treatment of women. All these issues have existed in most religions throughout time, but the treatment of women is different in which most other cultures and religions have minimized the issues and Islam, under its attempts to also end it, has failed to create a society in which the treatment of women is equal to that of men. The treatment of women, beginning from the time when they are born, to the time of their marriage, to the moment of their death, has not been equal to that of men despite the actions taken to end the injustice. The Islamic faith rose during the life of Muhammad the Prophet (570 - 632 C.E.) who was born in Mecca, an area that was mostly Jewish, Christian, and Zoroastrian. At the age of 40, during a religious retreat at Mount Hira, he had a revelation in which the angel Gabriel spoke to him. This led to many more revelations throughout his life which led to the Qur'an being written. ...read more.

Verily evil is their judgment." The killing of female children is comparable to that in other eastern cultures such as China were the governments regulations is what has led to it. In Islamic culture, it is tradition and just the need for male children that had led to female infanticide. Although in modern days infanticide is rare and the Qur'an forbids it, modern methods of abortion has led to a way around the words of Allah. Other types of female oppression has been interpreted even here in the United States. Non-Muslims can sometimes see a Muslim woman walking through the street or shopping at a supermarket while wearing the hijab, an article of clothing that covers a woman's head, hair, and neck. People believe that Muslim women are made to cover themselves, but this claim is said to be untrue. Muslim women argue that they cover themselves not because men tell them to do so, but because they want to be seen for who they truly are and not be judged upon their looks. They also say that they cover themselves because their husbands are the only ones who can see their beauty. ...read more.

This is untrue. Muhammad, in an attempt to regulate the amount of wives a man had, suggested that a man have a maximum of three to four wives to ensure that he pays attention to all of them equally. Polygamy in Islam is still allowed but is not as common as before. I believe what I have stated and argued above. Although I see the treatment of women a fault at which Islamic culture, not Islamic religion, has failed to resolve, I do not ignore the fact that other cultures, even my own, also have shameful faults which also have not been corrected. Islamic religion has indirectly influenced how women are treated in Islamic society, but it has also taken steps to guarantee a better life for both sides. For example, I see polygamy as good because instead of having men just sleep around without commitment as they do in other cultures, they can marry multiple women and be responsible for their financial and emotional support for their families. I also liked the fact that Muhammad, influenced by Jewish scholars, limited men to a suggested four wives so that a man can more easily be responsible for all wives equally. ?? ?? ?? ?? ...read more.