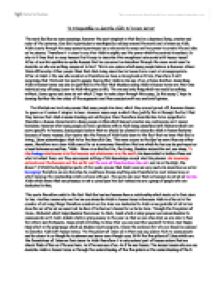 &quot;It is impossible to describe Allah

"It is impossible to describe Allah in human terms" The word God has so many meanings, however the most simplest is that God is a Supreme Being, creator and ruler of the universe. One God in particular is worshiped by millions around the world and is known as Allah. Allah clearly through his many names is portrayed as a role model to many and has power to create life and take as he pleases. Therefore it is clear to say that Allah is mighty and the power which he controls is endless. So why is it then that so many humans find it easy to describe this exceptional role model with human terms? After all are his qualities so unlike humans that he can never be described through the same words used to describe us who are nothing compared to him? This is one opinion which many people believe in however others think differently. Other people think that Allah being described in human term in not at all inappropriate. After all Allah is the one who created us therefore we have a strong bond with him, therefore it isn't surprising that this bond has lead to people feeling that Allah is like one of us, a fellow brother. Describing Allah in human terms can also be justified by the fact that Muslims calling Allah in human terms are their own individual way of being closer to Allah who gave us life. ...read more.

And finally Hajj which is the pilgrimage which all Muslims must complete. Allows the evidence for why we should be allowed to describe Allah with human terms. The five pillars of Islam all in their own way allows Allah to communicate and be closer to us though he is unknown and never seen though eyes. With the five pillars of Islam which are the foundations of Islam we feel closer to Allah therefore it is only natural part of human nature that we should think of him as if he was here. As if he was one of us. As if he was human. The second reason why we can describe Allah in human terms is through the understanding of the five pillars as the understanding of the 5 pillars can lead to us having a special relationship with Allah. Which then lead us to feel like Allah is one of us. Therefore like us with features. With his eyes he can see our every move, not to spy but to make sure we are not lead astray by evil. Ears to listen to our prayers and our pleas when were in trouble. Nose to smell our fears when we are frightened and need help from him. And finally Touch to touch our hearts when where in hardship and need guidance. ...read more.

After all he is the creator and we are what he created. Allah is mighty and the power which he controls is endless and for humans to describe this exceptional role model with human terms is unbelievable after all are not his qualities so unlike humans that he can never be described through the same words used to describe us who are nothing compared to him? Though the two arguments are very precise and have good points within them, in my opinion I think that the fact that many people describe Allah in human terms is natural as they feel like Allah is one of us, human therefore have a connection to him which makes there faith in their religion stronger. However at the end of the day the fact that Allah is powerful and mighty means that he has powers to control the universe which beyond our understanding and knowledge. So how is then we can describe him like us when we have never experienced this power. We are humans and where created into life by God therefore he is at a higher level then us we are the creation and he is the creator. As a result of this it is clear that Allah will never be a described in human terms as he created the world therefore as a mark of respect to him we should not describe him in human terms. ?? ?? ?? ?? ...read more.