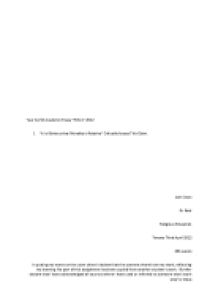 It is Obvious that Morality is Relative Critically Assess This Claim.

﻿Year 12/13 Academic Essay ?Ethics? 2012 1. ?It is Obvious that Morality is Relative? Critically Assess This Claim. Joel Croos Dr Reid Religious Education Twenty Third April 2012 894 words In putting my name on the cover sheet I declare that the contents therein are my work, reflecting my learning. No part of this assignment has been copied from another student?s work. I further declare that I have acknowledged all sources where I have used or referred to someone else?s work and/ or ideas The exact nature of morality is a conundrum which has separated ethicists for eras. Albeit at times during the world there has been a clear distinction between what is perceived as good and what is perceived as bad. For example; In Ancient Greece it was considered customary for grown men (not necessarily fathers) ...read more.

(absolutist): doing what is right means doing your duty or following the rules?[2] .To be able to contrast and criticise between Absolutist ethical theories and Relative ethical theories, we must first comprehend what are some constituents of each theory and the definitions. Kant and the Natural Law are major components of Absolutist ethical theories, Kant states that we should act according to maxims that we would want to see as universal laws. These laws are absolutist and that we will be able to work them out through ?a priori knowledge? which is knowledge of proposition and doesn?t require experience to be known true, this mean we can work them out logically prior to experience. Natural Law is debatably deontological, as it leads with a set of rules that people must follow and these rules know of no exception hence they are absolutist. ...read more.

if I had an obligation to be honest all the time, it would usually lead to great happiness, however in some cases it will lead to more unhappiness, this is absolutist because there are no exceptions to the rules.[5] Another dual theory is Virtue Theory Aristotle derived a list of virtues that we need to acquire, through education and routinely (as in everyday life), in order to have a happy life. This view can be seen as absolutist and teleological, because it is about the ends or purposes of our actions. Albeit Aristotle claims that particular ends or goals are absolute, it?s always good to have good virtues such as kindness, honesty etc. To recapitulate, it is not vastly evident that morality is obviously relative, and not obvious that is better than absolutism; however both theories can only be truly a***s on a case by case basis, not including extraneous circumstances and scenarios which are on both sides. ...read more.