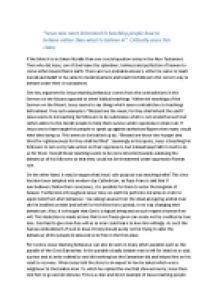 Jesus was more interested in teaching people how to behave rather than what to believe, discuss.

Transfer-Encoding: chunked ﻿?Jesus was more interested in teaching people how to behave rather than what to believe in?. Critically a***s this claim If the bible it to be taken literally than one crucial question arises in the New Testament. Then why did Jesus, son of God leave the splendour, holiness and perfection of heaven to come sinful mound that is earth. There are two probable answers, either he came to teach morals and belief or he came to model manners and teach his followers the correct way to behave under their circumstances. One key argument for Jesus teaching behaviour comes from the contradictions in the Sermon on the Mount opposed to other biblical teachings. Within the teachings of the Sermon on the Mount, Jesus seems to say things which seem contradictory to teachings beforehand. One such example is ?Blessed are the meek, for they shall inherit the earth?. ...read more.

Furthermore throughout Jesus? time on earth he performs miracles in order to aspire belief not alter behaviour. Via raising Lazarus from the dead and giving a blind man site he instilled wonder and belief for his followers to spread, in no way changing their behaviours. Also, it is thought that God is a logical being and as such respects human free will. This deduction is made as love that is not freely given can surely not be credited as true love. God had to give man free will as so man could learn to love him willingly. As such the human embodiment of God in Jesus Christs should surely not be trying to alter the behaviour of the people he allowed to be free in the first place. Per Contra, Jesus teaching behaviour can also be seen in many other parables such as the parable of the Good Samaritan. ...read more.

There may also be an argument in saying that Christ was not teaching behaviour as such but instead that any action instilled by his teaching is just giving his followers beliefs credibility. As in the book of James, the quote ?Faith without works is dead? is taken. Showing that in the eyes of God if belief is not acted upon it is pointless. This is a contradictory point to the argument that Jesus was preaching the Beatitudes in order to subdue his followers thus protecting them from harsh Roman oppressive actions. In conclusion, I believe that although Jesus? main aim may have been to teach his followers beliefs he ended up altering their behaviours more so. The Beatitudes teachings of submissive is clearly correlated to surviving under Roman rule and parables such as that of the Good Samaritan teaches how to behave towards your neighbours. ...read more.